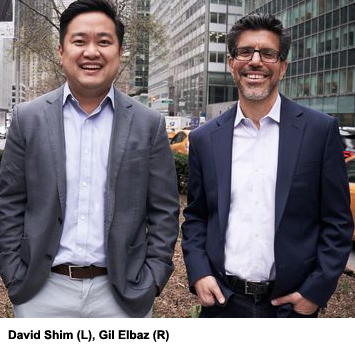 It’s been a big week for location data-related deals.

And a day before, Foursquare said it would merge with Factual. Together, Foursquare and Factual have more than $150 million in combined revenue, data derived from over 500 million devices worldwide and 400+ employees. The combined company will continue to use the Foursquare brand.

“We’re making some large bets right now in terms of the future of location,” said Foursquare CEO David Shim. Foursquare bought Shim’s startup, Placed, from Snap in May. He joined as president and was later elevated to the chief exec role after former Foursquare CEO Jeff Glueck left at the end of last year.

AdExchanger caught up with Shim and former Factual CEO Gil Elbaz, who is joining Foursquare’s board and executive team as part of the transaction.

On the rationale behind the deal (in 30 seconds or less). DAVID SHIM: “This is the combination of two market leaders, one in audience and the other in attribution, to create the No. 1 independent leader in location technology. We’re a single, interoperable stack. When you use one service, the other services become exponentially better. We’re trying to deliver a solution that opens up the market of location, not just for marketers, but for analysts and data scientists.”

On why the industry needs an independent location data and measurement provider. GIL ELBAZ: “One of the reasons I left Google [in 2007 after selling Applied Semantics] to start another company is because I became worried that a small number of companies – Google, Facebook and, increasingly, Amazon – have a huge data advantage. The industry needs an independent data player to ensure that other companies aren’t overly dependent on anyone.”

On the future of location data. SHIM: “We’re finding opportunities beyond advertising. There are other use cases. For example, both we and Factual have come out with analysis to understand the impact of COVID-19 on store visitation.

“Consumer behavior, especially offline purchase behavior, is changing. The muscle memory of going to your favorite restaurant or retailer is forgotten in a stay-at-home world. Coming out of this, when the doors open back up, we think there will be a great reset. Brands will have to become more aggressive and know how and when to take action.”

On foot traffic trends in a world with very little foot traffic. SHIM: “We’ve seen foot traffic at Costco, BJ’s and other big-box retailers go up at the beginning of this as people bought the supplies they needed to stay at home. Now we’re seeing it tail off. But grocery visits are still steadily increasing, going up and to the right.

“It isn’t that foot traffic has completely stopped. It’s just changed. Take a casual sit-down restaurant. They can’t have people sitting down right now, but they do still need to reach their core customers so they can highlight things like delivery and pickup. Together, Foursquare and Factual can identify people, for example, who have visited a restaurant in the past 30, 60 or 90 days and target ads against that group with different messaging.”

ELBAZ: “Grocery shopping behavior is also different now that people are working from home. Previously, people might have focused their buying activity near where they work, but that changes now that they’re at home and stores are offering the ability to buy online and pick up. Audience targeting changes dramatically.”

On privacy. SHIM: Consumer value, transparency and consumer protection are our three core tenets. We’re very much in favor of federal regulation for location data and how it’s used, but we also believe it’s important to give consumers value from their data. There’s no place for an app that’s tracking location in the background without a purpose, and consumers need to know what they’re opting into. We also validate every app that uses our SDK and we audit anyone who licenses our data.”

On whether Foursquare is planning another acquisition after doing two deals in less than a year. SHIM: “We’re focused on integration and delivering the best possible solution for our customers in the near term. Factual, Foursquare and legacy Placed give us that full stack.”