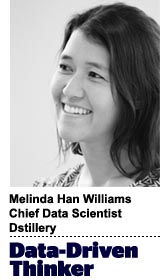 But Google’s move is right in line with a current industry trend – one that Google itself actually solidified with its planned deprecation of third-party cookies.

Ad tech has been caught in a tug-of-war between the data minimization ethos of the current privacy-centric era and what you might call the data maximization and hyper-optimization principles that have long been the promise of digital advertising. The resolution, perhaps counterintuitively, lies in AI and machine learning.

Bigger is better vs. less is more

The industry used to believe that the future of online advertising started with “big data.” While that’s no longer a hot term in marketing circles, the concept of big data kicked off the hyper-granular targeting paradigm that we have today.

Initially, the idea was that more data is better. The more touch points and fine-grained observation that a brand or agency could get their hands on, the more likely they’d have high-performing, efficient campaigns.

However, data collection was done in a way many users did not understand or know how to opt out of, so different players began making reactionary moves to limit tracking. This progression of events created a straight line toward a future where there is no “default on” individual user tracking available in the online ad space. Google’s plan to retire third-party cookies entirely from its Chrome browser by late 2023 is the final confirmation that this is indeed the direction the industry is headed.

Yes, there will be new identifiers available, and they have the potential to be great solutions. However, not all publishers will adopt these new options, and even users who opt-in may not do so on every site. A substantial amount of ad inventory will be left without any identifier, user history, or profile. If marketers wish to reach their customers with this inventory, they’ll need to reach them without one-to-one user targeting.

Privacy and big data have become fundamentally opposing forces. Clearly, ad tech’s relationship with big data is about to change. How does an industry that came of age in this era of “bigger is better” adapt to a new privacy-centric philosophy of “less is more”?

Do more with less

The answer lies in artificial intelligence, which, to date, has been more aligned with the “bigger is better” side, fueled by user-level data. The thinking goes that the more data, the better the optimization, so it may seem like moving into a new era of less data means there is no longer a place for AI, or that AI itself will be far less effective in digital advertising.

Fortunately, AI and machine learning have matured since the early days of ad tech. AI has become more adaptable in terms of what data it can learn from, which means that for the case of targeted advertising, AI is less reliant on that traditional user-level big data. So rather than a conflict between bigger is better and less is more, today’s AI does more with less.

So how can advertisers and agencies do more with less when they’re targeting ads to users that have no ID? The answer is to learn from the data that you do have.

In this future targeting landscape where so often there is no data available on the individual user, the approach is to learn as much as possible from the data that is available. One data source is opted-in digital panels, which offer a privacy-friendly way to study a continuous influx of digital journeys of people who have agreed to share their data. The data seen with these panels can help advertisers decipher an incredible array of consumer behavior, without tracking the behaviors of individual consumers being targeted.

While learning from digital journeys can provide a detailed understanding of consumer behavior, there’s yet another level of precision available. Brand marketers have their own first-party data, which is immensely valuable for AI modeling. By combining the observed, anonymous behavior with a brand’s own data, AI can predict which ad opportunities will likely result in conversion events for that brand without ever seeing an ID or any other information about the user who ultimately receives the ad.

Rethink your relationship with big data

The advertising ecosystem is fundamentally changing. While we’ve moved away from using the term “big data,” it’s now time for anyone using user-based data to change their relationship with the concept as well. Big data is no longer a viable option, but that doesn’t mean the cutting-edge technology advertisers use will be rendered ineffective. AI can do more with less, delivering performance without individualized data on the actual users who see specific ads.

Google’s move toward machine-learning modeled attribution is a recognition of the fact that marketers need to use measurement approaches that consider ad inventory without identifiers in order to run campaigns with the highest ROI. But it’s also a reminder AI can resolve the conflict between big data and privacy for attribution as well as targeting.