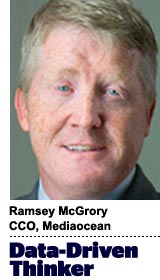 Today’s column is written by Ramsey McGrory, CCO at Mediaocean.

Closed ecosystems such as Facebook, Amazon and Google are likely the prevailing structure for media in the next decade, due to privacy-centric regulatory and policy shifts. And this move away from cookie based data to first-party identity are causing both established and emerging players to strengthen their position on the new advertising landscape.

Real innovation is happening with retailers, grocers and pharmacies, including Target, Kroger and CVS among others, who are building data-rich media networks. These Retail Media Sellers (RMS) have the right formula for success in a cookieless, privacy-centric future: a combination of first-party identity and transactional data, seamless tie-ins to commerce, and real, enduring digital and physical relationships with consumers.

The question for retailers isn’t whether they can capitalize on this opportunity, but how: how to ensure the secure flow of data, how to tie into the right supply and how, in the bigger picture, they establish media as a core competency for their overall business.

A growing cast of players


While Google, Facebook and the media networks have massive scale, they lack the deep transactional data of a retailer like Amazon, which will approach $20 billion in ad revenue this year, and is growing at 51% YoY.

Amazon’s model represents the next generation of closed ecosystems built on a solid commerce foundation. Major players such as Walmart, Kroger, Target, Best Buy and others are all following Amazon’s lead by investing in their advertising businesses based on first-party consumer data including SKU-level data on transactions. Consumers meme about their Bible-length CVS receipts, but think about the data and infrastructure CVS had behind it as they announced their CVS Media Network. Walgreens became the most recent entrant to the game with its launch of Walgreens Advertising Group. Other players include Best Buy, eBay, Home Depot, Instacart and even Uber.

RMSs are transforming the advertising landscape in a positive way with vast amounts of permissioned first-party data, including SKU level transaction data that can be used to create closed looped measurement that validates the advertisers’ investments. These retailers can become advertisers’ ‘must have’ partners in the future offering targeting, measurement and scale, but only if they can generate scale with privacy guardrails.

Valuable intelligence, but can it scale?

Unlike Facebook, Amazon or the largest media networks such as NBC, Viacom and Fox, the retailers lack the diversity of ad inventory. Solving that challenge will depend on their embrace of modern systems for orchestrating data and streamlining billing and payment, and the willingness of social and media networks to allow these RMSs to purchase inventory leveraging RMS data.

Major retailers can monetize their commerce experiences with search and display ads, but they don’t have the core competencies required for a scaled media business, and it’s ecommerce heresy to date to insert interruptive ads into the ecommerce experience.

To scale, retailers and other commerce players must look beyond their O&O ad inventory, building media sales teams and partnerships with the largest media networks. Roku’s deal with Kroger is a recent example.

The media networks are receptive because these data rich media buyers know what audiences they want, are willing to pay higher rates and are delivering higher quality and more relevant ads. That said, they view RMSs as “frenemies,” potentially competing for the same dollars, so these partnerships are not without some peril.

Further, access to inventory is necessary but not sufficient. For RMSs to be effective and scale, they have to build an internal organization, infrastructure and process enabling the secure portability of intelligence for advertisers to act on retail data outside of RMS media properties. In unlocking these solutions for advertisers, they must address three core competencies.

1) Data & Data Science – RMSs must protect and map first-party audience and SKU transaction data to understand who a user is across ad inventory pools, what the marketers want and how to measure. RMSs are historically strong on data science but haven’t dealt with identity portability at this level and must rapidly acquire the means to do so while deploying it efficiently to inform targeting and analytics.

2) Media Management – RMSs are ad networks that both buy and sell media. This double role represents a monumental operational challenge. If they don’t have financial and contractual processes worked out, they will be crushed under the weight of emails, Excel spreadsheets, incorrect orders, invoices, demands for payments and lags on advertiser payments.

3) Performance and Measurement – Log file or spot schedules need to be consolidated with SKU level transaction data, then analyzed and turned into the measurement that validates the media investments. This requires sophisticated data science capabilities, both in house or through third parties. And passing data efficiently and securely between such stakeholders requires serious infrastructure.

Historically, the complexity and “off strategy” nature of building media businesses has kept all but the largest retailers from building media networks. But with Amazon’s success, RMSs see a path to creating a 20% EBITDA margin revenue stream compared to the 1.5% retail margin.

The industry should view RMSs as an important part of the future. If they can master the competencies, Retail Media Sellers will bring depth and dimension to an advertising ecosystem that has been dominated by a handful of players.

Unlike social platforms, even the largest RMS represents only a portion of an advertiser’s target audience or geographic footprint. So, the challenge for marketers and agencies will be in selecting which composition of RMSs to include in their media mix, and how to optimize their allocations based on a unified view of performance.

Also, with the move to identity-based advertising and away from the easy and unreliable supply of cookie-based data and programmatic ad inventory, advertisers are more comfortable shifting to partners who have likely been co-op marketing partners and who can deliver higher quality targeting and scale.

Data rich, transparency and trust are all coming together, and the emergence of Retail Media Sellers heralds a period of diversification among closed ecosystems.