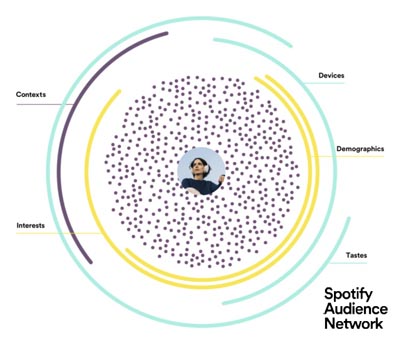 Podcast monetization is top of mind at Spotify.

On Monday, the audio streaming platform introduced the Spotify Audience Network, an audio advertising marketplace where advertisers can reach listeners across ad-supported music, Spotify’s own original and exclusive licensed podcasts and podcasts hosted on Spotify-owned Megaphone and Anchor.

The audience network “will give advertisers the ability to reach and target audiences at scale both on and off Spotify,” said Dawn Ostroff, Spotify’s chief content and advertising business officer.

Although US consumers spend roughly the same amount of time listening to audio content as they do watching digital video – more than nine hours per week – “we haven’t seen the same growth in digital audio advertising,” Ostroff said.

Radio and satellite alone is a $30 billion advertising market, despite the fact that “they don’t have a fraction of the signals” available through digital audio ads, she said.

The fact that podcast consumption has historically been counted based on downloads rather than streams, hasn’t helped. Advertisers were “flying blind” without a clear idea of whether – or how many times – their ads were heard, Ostroff said.

Coming soon, Spotify will scale that capability to podcasts that monetize through Megaphone and to creators on Anchor.

Third-party publishers will have ability to tap into dynamic ad insertion through Spotify for the first time, said Ostroff, who noted that since its launch SAI has become one of Spotify’s most-used advertising tools.

And keeping with the podcast monetization theme, Spotify also announced that it’s expanding Spotify Ad Studio, its self-serve ad platform for audio and video ads, to include podcasts. As with its other monetization tools, Spotify will start with original and exclusive podcasts and add third-party podcast content down the line.

Beta testing for podcast ad buying through Spotify Ad Studio is now live in the US.