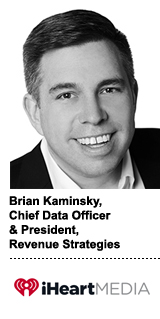 IHeartMedia’s acquisition on Wednesday of audio streaming and podcast tech provider Triton Digital for $230 million is only the most recent example of its big bet on podcasting.

In less than two and a half years, iHeart has built its ad stack with the purchase of analytics and programmatic advertising provider Voxnest, programmatic radio platform Jelli and Radiojar, a cloud tech platform for radio broadcasters.

With Triton now in the fold, it’s time for iHeart to stop, take stock and start integrating, said Brian Kaminsky, chief data officer and president of revenue and data operations at iHeartMedia. Kaminsky oversees all of the platforms that iHeart uses to monetize, which now includes Triton.

“Google and DV360 provide a tech stack for display and video, but there’s never been an equivalent for audio,” Kaminsky said. “That is what we’re building, and not just for the big publishers, like iHeart.”

The goal, he said, is to give long tail publishers the same access to tools for creation, monetization and reporting and to the same level of demand that larger audio creators have at their disposal. Smaller advertisers also need an opportunity to buy against streaming audio content, he said.

What exactly do you get with the Triton deal?

Triton does a couple of things for us. For one, they own the largest audio marketplace that exists right now. But they also have digital audio, ad tech and content creation tools for streaming and podcasting and a suite of audio-specific measurement tools.

IHeart is a multiplatform audio company and we were getting to a place where we were working with too many vendors and partners, and audio itself wasn’t properly integrated from a data perspective and a delivery perspective.

How does Triton complement your existing ad tech assets, like Jelli, for example?

Triton and Jelli are like two sides of the same coin. Jelli did for broadcast what Triton is doing for streaming and podcasts.

But Jelli has a digital-centric set of user interfaces and algorithms for planning and dynamic ad insertion for broadcast radio, and although Triton has connections to various DSPs out there through APIs, they don’t have their own DSP or user interface.

With Triton, streaming and podcasts can be included in the Jelli DSP, which previously only had broadcast, and we can leverage Triton’s API connections into Xandr, DV360 and other DSPs to bring in broadcast. In essence, it’s creating a singular marketplace where people can buy and sell through a unified solution.

IHeart has been on an acquisition spree. Do you have plans to buy any other ad tech assets?

Rather than acquiring more companies, our focus now is to take the companies we’ve already acquired and bring them together to democratize the creation of audio content.

But we have a tremendous amount of work to do in terms of integrations. There’s no switch we can flip. Triton has an amazing engineering team, though, which is one of the reasons we’re so excited about this acquisition.

What have you noticed about the growth of podcast consumption in general and over the past year?

As Bob [Pittman, our CEO] recently said, people have run out of time for their eyes. But audio can keep you company while you cook, work out, go for a run, go to the store.

We want to help people become creators of that content and to monetize it, mostly through programmatic channels. We’ll still sell our premium stuff directly, like what we do with Will Ferrell or Shonda Rhimes, but there is a lot of long tail content, including premium back catalog shows, that’s going to all be programmatic.

I know you’ll be busy integrating all of your acquisitions, but what are some other opportunities in the audio space right now from an advertiser perspective?

One place we’re going to focus some attention is on distribution platforms where the users are more anonymous to us. We’re big believers in privacy, but there are non-PII means by which advertisers can be informed about who their audiences are. Smart speakers, automobile listening – these are places where audio is being consumed, but not through platforms we own outright.

Because Triton hosts podcasts and has a CDN, they can give us a tremendous amount of volumetric data, like session length, whether someone is listening through a smart speaker or whether they’re using headphones.

Total audience measurement solutions can help broadcasters and content creators know more about who their audiences are, but they’d also be good for advertisers who could use them to make better buying decisions based on data.