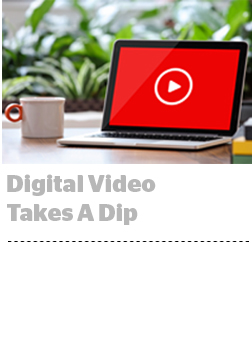 Even if digital video continues to grow through the COVID-19 crisis, growth rates will decline dramatically in the first half of 2020 from previous estimates, according to an eMarketer forecast released Friday.

“There’s still a chance video spending will grow in the first half of the year,” said eMarketer analyst Nicole Perrin. “It might go down significantly, and it will definitely come in way under expectations. But that won’t necessarily translate to an absolute cut in spending.”

Digital video could be bolstered by an extremely strong Q1, when US advertisers increased spend between 10.5% and 17%. But given the state of the United States’ economy, spending on digital video ads in Q2 will still decline between 1.3% and 21% year over year.

Those declines are likely continue through Q3, given the uncertainty of coronavirus testing capacity and a potential second wave of infections, Perrin predicts.

“I personally think that Q3 is probably going to look a lot like Q2,” she said. “I do fear that that level of spending declines will continue.”

While many brands don’t have budget or a viable product to sell right now, advertisers doing well through the crisis can take advantage of falling CPMs as supply increases and demand wanes to score premium placements, buy more expensive ad formats or simply grow their share of voice.

“Advertisers who haven’t been able to afford video at other times might start spending on it now that they can,” Perrin said.

Digital video also offers a good branding opportunity for advertisers that don’t have anything to sell at the moment. Many are leaning into animation and influencers to fill the production gap for digital video creative with shoots on pause.

EMarketer issued such a wide range of numbers because it used a different methodology for this report. Rather than looking at revenues for the largest media owners, which are not yet available, the company cross-referenced conversations with the buy and sell side, news about the economy and government lockdown orders with its regular estimates of how each major vertical will contribute to different ad formats.

Digital media is especially subject to volatility because budgets are fluid and easy to pull until an impression is served, Perrin said. The company will release its full year digital video ad spend forecast in June.

“Depending on the choices advertisers make between now and the end of June, there is a lot of room for different outcomes,” Perrin said. “Things could change either for the better or the worse. That’s why we have a big spread.”