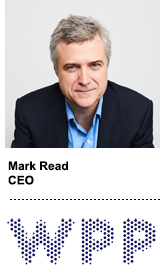 COVID-19 has had an outsize negative effect on GroupM than on the rest of parent company WPP’s business as clients paused and cut back on media spend during the crisis.

The holding company did not break out GroupM’s Q2 or H1 revenues, but WPP CEO Mark Read told investors on Thursday that the media buying division was “more impacted by downturn in client media spend from COVID-19” than were other disciplines.

“In that context, it’s not surprising that GroupM was most impacted,” Read said. “Clearly, their business is most linked to advertising expenditure.”

But ad spend tends to bounce back quickly after a crisis, Read added, so “there’s no particular strategic concern” as it relates to GroupM’s performance. “I think we’ll see the rebound of GroupM the other way,” he added.

GroupM is benefiting, however, from the growth of ecommerce, which now makes up 18% of its digital revenues, growing 19% in the first half of 2020 to $1.4 billion, and comprises 8% of WPP’s net sales. WPP’s CPG clients have increased ecommerce spend by 100% on average since the start of the pandemic.

Read highlighted ecommerce as a continued strategic focus as online shopping grows around the world. The company, for example, recently helped Adidas maximize its ecommerce strategy on Amazon, increasing the brand’s online sales by 93% in Q2.

“Despite easing of lockdowns, patterns of behavior have shifted permanently,” Read said.

COVID-19 has also proved that WPP’s long-term strategy to integrate marketing disciplines through agency mergers is bearing fruit, Read said. VMLY&R and Wunderman Thompson were the strongest performing of all WPP agencies in the first half of 2020.

Although WPP’s Q2 was, in Read’s words “slightly better” than expected and “significantly better than some of the worst-case scenarios” the company had entertained back in March, results varied by region based on the extent of lockdowns in different markets.

In the United States, revenues dipped 9.6% in Q2 and 5.8% in the first half of 2020. WPP predicts the country will be down almost 13% for the year, excluding political ad spend, although performance has started to inch back up to -6% growth in July.

China, which was hit by the virus first, saw a rebound in Q2 to -11.6% growth, but was declining again at 18.6% as of July, which WPP attributes to tough year-over-year comparisons.

While it’s a positive sign that most markets have begun to pick back up as of July, it’s too soon to call this a recovery. WPP predicts its revenues will be down between 10% and 11.5% in 2020.

“We need to be sensibly cautious about our outlook for the second half of the year,” CFO John Rogers said on the earnings call.

The good news for WPP is that its top 200 clients, which account for 64% of revenue, declined less than the group overall at -8.4%.

More than half of WPP’s top clients are in the CPG, tech, healthcare and pharma sectors, which have all proven more or less resilient during the pandemic. Just 22% of its client base is in the auto, luxury, travel and leisure sectors, which declined collectively by almost 19% in Q2.

New business has also rebounded after a dip in May and June, with WPP winning accounts from Intel, Unilever and HSBC.

“The pandemic has impacted smaller businesses more than our client base,” Read said.

While WPP is hoping to get people back in its offices in certain markets soon, it doesn’t expect work to go back to the way it was before the pandemic. The company plans to gain around $265 million in permanent savings from reduced travel, hotel accommodations and headcount.

“We want to rightsize the business for the new world,” Rogers said, “but we want to make sure we can bring back resources when the market starts to recover.”