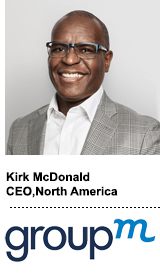 McDonald, who’s been serving as the interim head of AT&T-owned Xandr since CEO Brian Lesser stepped down in March, will report directly to GroupM Global CEO Christian Juhl. McDonald will be replaced by AT&T exec Mike Welch at Xandr, previously EVP of product and business development.

One of his main objectives will be to accelerate Juhl’s vision of GroupM’s agencies working more collaboratively to help drive outcomes for clients.

“We’re going to get smarter at making sure we behave as one and put the customer in the center,” McDonald told AdExchanger. “That collaboration is going to allow us to be smarter and more effective overall.”

GroupM has been without a CEO in North America since Tim Castree left the company in November 2019. Juhl had been running the group’s North American business on an interim basis.

North America is GroupM’s largest region, with more than $17 billion in media billings and 6,500 employees.

McDonald said he was attracted to GroupM’s scale, which puts it in a unique position to rethink what he called the broken value prop of advertising to consumers – a goal not unlike the one he was pursuing at Xandr, but from the publisher side.

“The scale of doing this for thousands of brands is very different than the scale of any individual publisher, regardless of how powerful their storytelling is,” he said.

McDonald steps into one of the top roles at GroupM as its clients attempt to navigate the COVID-19 pandemic and the related economic pressures alongside rapidly changing consumer media habits.

GroupM itself was not untouched, experiencing a round of layoffs across its agencies in early May.

Despite the tough environment, McDonald said that “the work is getting more interesting than it’s ever been.”

“Brands want to figure out how to message consumers [during this crisis], and this is where agencies have been vital,” he said.

McDonald will measure his success based on GroupM’s ability to increase its market share in North America and “create a stickier relationship with clients,” he said.

Xandr, which launched with much fanfare in 2018, was folded into entertainment giant WarnerMedia in April.

McDonald is the latest executive to leave WarnerMedia since former Hulu CEO Jason Kilar came on as chief exec in April. Kilar has since restructured the business to elevate streaming talent and implemented layoffs after the company lost $1.5 billion in Q2, parting ways with longtime execs, including Kevin Reilly and Bob Greenblatt.