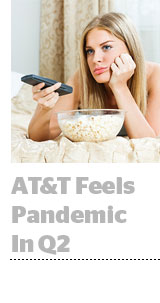 The impacts of the coronavirus pandemic on AT&T and WarnerMedia are far reaching, totaling $2.8 billion in the second quarter alone. Overall, AT&T revenue declined 9% YoY to $45 billion in Q2.

CEO John Stankey expects the effects of the coronavirus to become the “business norm well into next year.”

AT&T’s WarnerMedia division took the brunt of the hit from the pandemic, with $1.5 billion in lost revenue directly attributable to the coronavirus.

Xandr revenue declined 25% in Q2 to $362 million. (AT&T won’t separate Xandr revenues in the future since folding the division into WarnerMedia at the end of April.)

Lack of movie and TV production further raises alarm bells for 2021, as it will affect subscriber acquisition for HBO Max next year, Stankey warned, since original content leads to new subscribers. By August, HBO Max will have 21 new original series, “which will sustain near-term acquisition,” he said. What happens next year will depend on the pipeline of originals WarnerMedia can feed into the platform.

AT&T didn’t separate out HBO and HBO Max subscribers. But it only added 1.7 million subscribers across both services in the past six months, going from 34.6 million to 36.3 million US subscribers. That’s far short of Disney Plus’ meteoric rise.

HBO Max has been plagued by availability issues. While Disney Plus was able to settle its distribution dispute with Amazon Fire in November, pre-launch, Stankey told investors that Amazon Fire has taken a different approach to HBO Max than it has to comparable services – so it’s not available.

One key difference may be that these distribution services often want a cut of ad revenue, and HBO Max plans to launch an ad-supported version next year. NBCUniversal’s Peacock also isn’t available on Amazon Fire, while Disney Plus is committed to staying ad-free at the moment.

HBO Max (and Peacock) also aren’t available on Roku, though Stankey only name-checked Amazon Fire on the earnings call.