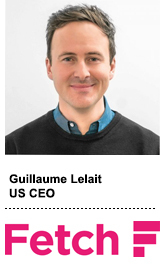 Since Guillaume Lelait was promoted March 20 from Fetch’s US managing director to its first-ever US CEO, he’s inherited a wealth of operations and clients.

Last September, Uber sued Fetch for $40 million after accusing the agency of buying click fraud to take credit for app installs it didn’t drive. But Fetch said it ended its relationship with Uber months before the suit, when the ride-sharing client stopped paying invoices to vendors. Fetch countersued Uber for $20 million in unpaid invoices in January.

“We delivered from a business metric what we worked on with Uber, which is millions of new customers for the past three years,” Lelait said. “We expect that the results of this legal process will show that their claims have no merit.”

Despite the lawsuit, Fetch is pushing for global scale. Lelait’s new role puts him in charge of the US market as James Connelly, Chairman at Fetch, focuses on launching the agency in new markets.

The agency, which launched in the US five years ago, operates out of San Francisco, close to many of its mobile-centric clients, including Mozilla, Apple, Expedia and Facebook. Although the agency started in London, the US now makes up about 60% of global revenue.

Now, the agency, which is owned by the Dentsu Aegis Network and has 100 employees in the US, is launching in Asia under a joint venture with Japanese entity Dentsu. Fetch opened doors about three months ago in Tokyo and will open in Singapore in April.

AdExchanger: Is your new role related to Fetch’s ongoing lawsuit with Uber?

GUILLAUME LELAIT: James [Connelly] didn’t step down. We’re focusing on new regions, so [the org shift] is for James to focus on other markets and for me to oversee the US. That’s why we’re together in Singapore right now. It’s not at all related to Uber. Uber is a legal process so there is not much we can say about it.

What happened with Uber, from your perspective?

Fraud existed and we were both aware of it and we were tackling this issue together. They dropped their claims in December and Fetch countersued. So it’s ongoing; it’s going to take a while. But now it’s a legal matter.

Is it affecting your ability to win new business?

No. We’re still winning new accounts and have been all year. It’s disruptive but we haven’t lost a single account. We’ve added more than the equivalent of what Uber was as a client in terms of new business [including AEG Presents and Lululemon].

I think that can attest that other clients are supportive of what they saw in the news. In the US legal process, when someone wants to make a claim against another company, they can pretty much say anything they want.

How do you combat mobile fraud, which is increasingly on marketers’ radars these days?

There is a general lack of trust from brands around suspicious activity, click fraud and viewability. Before what happened with Uber, we were looking into fraud-free inventory and adding processes to ensure we were buying high-quality, procured traffic. It’s still one of the top three priorities brands are asking any agency to look into. It’s something that we feel really strong about and have a good knowledge of how to identify.

Fetch started out as a mobile agency. How many clients want a mobile-focused agency today, when mobile is becoming synonymous with digital?

A significant portion of our business is mobile, but the rest is fully digital. For certain clients, just being their mobile agency isn’t good enough, so you need to be able to act as their digital agency or full media agency. We felt that we needed to expand outside of mobile anyway, so it’s a natural evolution.

We’re still mobile-first. [Clients] need to put a significant part of their business toward mobile. We’re already working with those brands. Ecommerce, software and travel are categories that need really strong expertise in mobile, but also take advantage of the full digital spectrum.

What’s it like having Facebook as a client right now? Especially when your other client, Mozilla, stopped advertising on the platform after the Cambridge Analytica scandal.

Facebook is just one of the great platforms where people spend time. Mozilla is very privacy-forward. They want to make sure that consumers understand if you use data, you need to know what the data you collected is used for. So we respect that.

What platforms are interesting to you right now on mobile?

Amazon is showing $3 billion to $5 billion in advertising revenue. They’re already bigger than Twitter. We’re looking to search and Amazon skills. It reminds me of the beginning of iOS, when brands started to do apps on the Apple store.

Apple search [in the app store] is getting great interest from clients. Apple wants the app store to be a place where you spend more time, to turn that into a media program, so that could be a really interesting in terms of advertising opportunities. Apple is more keen on talking to the advertising market about what they want to do, so it’s a really interesting platform to look forward to.