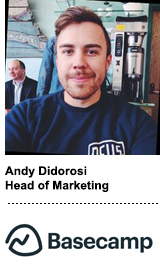 Project management software maker Basecamp does not mess with Facebook and Google.

“We vote with our dollars for the world we want to see, and we don’t want to see a world ruled by a handful of companies,” said head of marketing Andy Didorosi.

Basecamp avoids online consumer tracking, which is “creepy,” Didorosi said. Facebook and Google are also too expensive and ineffective at driving conversions for a B2B software company like Basecamp.

But even if they were the best converting marketplaces, Basecamp still wouldn’t spend money there.

“It’s like taking steroids,” Didorosi said. “It feels good at first, but then you take it for too long and you die.”

Instead, Basecamp leans into event marketing, blogs, email newsletters, podcasts and word of mouth to reach its audience, limiting tracking and diversifying spend as much as possible.

“There’s lots of interactive stuff we can do vs. spending $5,000 a day on one black hole,” Didorosi said.

Didorosi joined Basecamp, which has 59 employees, in late 2019 as its first head of marketing. The business, launched in 1999, was early to the remote work space but now faces new competitors as virtual business becomes the norm under COVID-19 lockdowns. Basecamp declined to share annual revenue figures.

AdExchanger: Why is Basecamp anti-Facebook and Google?

ANDY DIDOROSI: We don’t want to feed these oligarchies anymore. We’re hoping to spread our dollars as our vote against consolidation of power on the internet. Our cofounder invented Ruby on Rails, an open-source language a lot of the internet is based on. It’s designed to be an open, inclusive internet that has a large, thriving number of people.

My predecessor spent an enormous amount of money on Facebook, and we didn’t get the response we expected. So it’s not like we had a great thing going.

Selling B2B business software via social feeds isn’t effective. The CPMs on Facebook, Google and Instagram are too high. The cost per result is too low. We do have a Google [search] ad, because you need to pay them protection money to guard your brand name. We’d prefer not to, but they’ve developed a fiefdom around people searching.

It’s more work for me to deal with all the networks rather than typing a big number into one of them. But that’s the power of diversification.

Not many companies make business decisions based on their morals. Why Basecamp?

The main issue we’re coming up against now is tracking pixels in emails that report everything to the sender. It’s an invasion of privacy.

So where do you market?

We go pretty analog. We do conferences. Creative Mornings, an event where people meet once a week to talk about creative endeavors, was a partner of ours before the pandemic. We’ve worked with them to modify our sponsorship to be digital.

Basecamp has advertised on podcasts in the past, but now we’re doing a consolidated strategy. We’ll target niche shows to get a message to specific audiences. If you have a targeted output, you can speak to their challenges.

We have a blog that’s really well-read, so we engage people through that. We’re bringing back our newsletter. But a lot of it is our product and simply getting the word out.

How do you measure the success of your marketing?

We don’t have any KPIs. We look at the general trend of the business. Are we trending upwards? Are we adding more people than we’re losing? Great.

Most software businesses look for growth at any cost. They’re lighting cash on fire to outgrow the next guy. We just don’t subscribe to that. We have a calm, happy company with over 100,000 businesses working on [our software] daily. That’s a great place to be. It’s not a resting point on the way to somewhere else.

How do you determine how much to spend on marketing?

It’s a hunch. If we put a dollar toward an objective and see that we got a result back, you look at that and go, “Hey, does this seem right? Do we like the way this ad sounds? Did enough people take up our offer and become long-term customers?”

That’s not to say we might not sophisticate our approach. But it takes a lot of time for not an enormous impact.

Are current privacy laws such as GDPR and CCPA strong or effective enough?

I think they’re great. They are a shock to people. Software is set up for default tracking. [With] GDPR, unless you have a legitimate use case, you shouldn’t be tracking in the first place, let alone sending it to [other] people.

The internet has been warped into a behavior modification tool. Only regulation will stop that. Facebook has created the best propaganda machine in history. Twitter banning political ads is a start, but we have to litigate against this stuff.