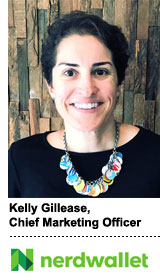 During a time of economic uncertainty, should a CMO put her brand on the sidelines? Or should she increase media investment – especially if buying ads is cheap?

NerdWallet’s CMO Kelly Gillease has been in the midst of that marketing calculus as the brand recalibrates its strategy for the rest of 2020.

“We decided that this is an important time to be helpful,” Gillease said. “It wasn’t in the interest of our long-term goals to totally pull back, so we proceeded on a similar level to before.”

At the beginning of the year, NerdWallet had embarked on its first national branding campaign. The consumer finance site bought prime-time TV ads to turn the decade-old company into a household name for money advice.

The campaign’s Q1 exceeded performance benchmarks, so CEO Tim Chen recommended extending the campaign into Q2 with a bigger budget.

Then the coronavirus pandemic happened.

As COVID-19 spread, NerdWallet’s readers navigated to completely different topics. Mortgage rates dropped, so they wanted to know about refinancing. When the stock market dived, millennials thought about opening investment accounts for the first time. Then, as the economic effects of the pandemic deepened, searches about unemployment benefits, stimulus checks and the CARES Act took off.

If anything, peoples’ financial needs have grown during the pandemic, putting NerdWallet in a better place compared to heavily affected categories such as travel. And the financial advertiser partners that pay NerdWallet affiliate fees for new credit cards or brokerage accounts have continued to invest in attracting new customers, albeit with a more cautious approach.

With these details in mind, NerdWallet created a strategy that involved spending slightly more in Q2 than in Q1 – but not as aggressively as originally planned before the pandemic.

In Q2, NerdWallet also changed its messaging. A voiceover that asked about buying a house was reframed as a refinancing question, for example, and another voiceover asks, “Should I be investing right now?”

“In times you have to pivot quickly, you’re catching agencies up all the time. It’s nice not to spend that energy,” Gillease said.

In contrast, internal teams are “part of every conversation. Everyone is very aware of what’s going on in the business.”

With its Q2 plan in place, NerdWallet is now mulling over its marketing presence for the rest of the year – and beyond.

As befits a brand that gives nerdy, precise financial recommendations, NerdWallet’s finance team developed a model to calculate the in-quarter and long-term payback of its marketing investments.

Since many of the financial partners that pay NerdWallet fees are taking more cautious approaches to their own affiliate deals, NerdWallet isn’t seeing quite the same short-term return as it did pre-coronavirus.

But if media costs decline in Q3 – many advertisers may cut their TV commitments, for example – NerdWallet could gain in a key metric to increase brand awareness, while spending far less.

Solving problems like these is Gillease’s specialty. The former economist often takes roles at startups that want to graduate from direct response to brand advertising but hold themselves accountable for brand advertising’s performance.

NerdWallet has decided that if it can get a long-term payback of around two years, then brand marketing is worth it.

Large TV advertisers that participate in the upfronts often have decades of data about campaign performance. Since this is NerdWallet’s first national brand campaign, it can only gauge TV performance by comparing the DMA-level test campaigns it ran last year.

But NerdWallet knows that with economic challenges come opportunity. Its CEO founded the company in 2009 after being laid off during the Great Recession.

If NerdWallet plays its cards right, it can help its customers through this period of financial turmoil and come out on the other side having achieved its goal – becoming a “brand of choice for consumer finance.”