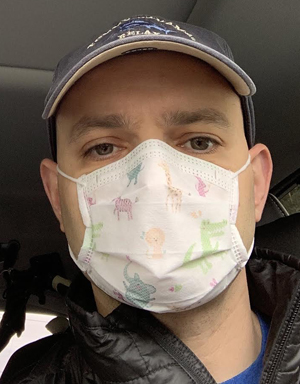 When Adam Blitzer, EVP and GM of three Salesforce clouds (Marketing, Commerce and Community) co-founded marketing automation platform Pardot in 2007, the Great Recession was just around the corner and real estate was damned cheap.

Pardot the startup snagged the top floor of a 34-story office building in Atlanta for $4 a square foot and bought 120 Herman Miller Aeron chairs for a buck from another tenant looking to unload.

Today, that same office serves as the top floor of Salesforce Tower Atlanta, and “we’re not paying $4 a square foot in 2020,” says Adam, who now lives in San Francisco with his wife, toddler daughter and 7-and-a-half-year-old son.

He splits distance learning duties with his other half, although she usually takes the reins on certain subjects. “Sometimes I can’t be trusted with the multiplication and division, so I become the recess proctor – I know what I’m good at,” Adam jokes.

One thing he’s definitely good at is building a business. After growing Pardot into a multimillion-dollar company with no outside funding, he sold to ExactTarget in 2012. Salesforce acquired ExactTarget less than a year later.

Will Salesforce stay acquisitive in the current economic environment? Although Adam remained mum on Saleforce’s plans, in general he predicts the industry is in for a lot of consolidation: “Anytime the IPO market becomes choppy or harder to forecast, it probably makes those strategic exits more interesting for companies.”

Also in this episode: The many different ways people have pronounced “Pardot” over the years from Pardeux (a la francais) to Pahr-daht (via Boston); why a customer data platform is now core to Salesforce’s strategy; and that time Adam dressed up as Lars Ulrich from Metallica during a Dreamforce rehearsal.