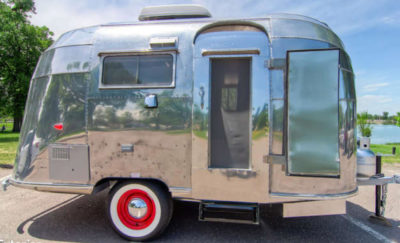 Some CEOs have a home office. Others, such as LiveRamp chief Scott Howe, have a 1956 Airstream Bubble trailer.

Today on “Social Distancing With Friends,” Scott steps away from his family of five (plus two cats and a white Lab) and checks in from his “perfect escape pod.”

The backstory, in Scott’s words:

I spent 15 years looking for a 1955 to 1961 California-built Airstream Bubble trailer. When I would go to client meetings, I would always check the classifieds in any city I visited and sometimes even drag clients along to inspect anything that sounded intriguing. (Not many of these model Airstreams were ever made). I finally found a beat-up junker, and then spent some time between Microsoft and Acxiom refurbing it. It’s actually far more comfortable than my office – it now has Lyptus hardwood floors, Douglas fir cabinets, a bathroom, microwave, television, refrigerator, kitchen table and bed, all in a 16-foot aluminum can.

Besides the Airstream, Scott shares his thoughts on the future of linear TV after the pandemic; the similarities he sees between the current economic downturn and the dot com bubble crash; and the verticals that have the best chance to transform their businesses when the crisis ends.

Also, we get a peek into LiveRamp’s disaster playbook, stemming from its Acxiom heritage. “We have a three-ring binder on absolutely everything that could ever happen, and we’ve war planned those things, like a tornado or a horrible winter storm,” Scott says. “We actually had a plan for a pandemic.”