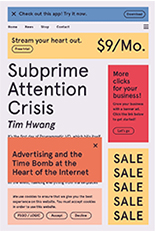 Tim Hwang’s 2020 book “Subprime Attention Crisis” argues that targeted advertising is a bubble set to burst. He contends that the intricacies of ad tech and the perverse incentives of agencies and ad tech platforms to maintain a steady flow of ad dollars have created a persistent opacity in programmatic markets. From his point of view, it’s only a matter of time before the bubble bursts and advertisers pick up their toys and go home. The result will be an implosion of programmatic ad spending and a partial collapse of the free internet.

The metaphor at the heart of the book is the 2007-2008 financial crisis, when the system failed to detect a huge vulnerability in the massive mortgage-backed securities market.

In the case of the 2008 implosion, he says in this lively and slightly combative podcast interview, “You had a global market that was considered rock solid and growing at incredible speed and in many ways dwarfed the programmatic ecosystem in economic importance, and yet there was a time bomb at the heart of it. One reason to use the metaphor is that it calls attention to the idea that sometimes $80 billion can be wrong.”