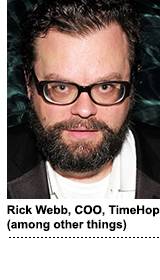 Rick Webb recently wrote an essay for the Why Is This Interesting newsletter about Apple’s looming App Tracking Transparency release, which will become reality next week. In it, he digs into some less commonly discussed issues with Apple’s new tracking rules, such as how they fail to provision for GDPR and how SKAdNetwork doesn’t let app marketers credit multiple sources for a conversion.

In this episode, Webb recaps his arguments and shares some cogent thoughts on that age-old question: What is Apple thinking?

“I feel like Apple understood advertising a lot more in the Steve Jobs era. Steve himself was more sympathetic to advertising,” he says. “iAd didn’t work but it was an effort to make a brand-based ad system that didn’t rely on all the tracking stuff.”

Apple still has an ad business within its app store, but most observers today view the company as indifferent at best ­and antagonistic at worst to the fate of advertising-based business models. If app developers give up on ads and impose paid models on their users in an effort to follow all of Apple’s rules, all the better.

“I think they have this high-level distrust of advertising,” he says. “I don’t think that the drive to move people to the paid ecosystem to get a cut is the prime reason they’re doing all of this, but it might be a nice benefit for them.”