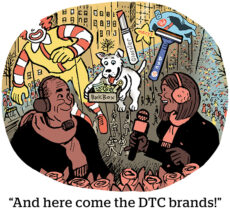 Amazon may rebrand IMDb TV, its free ad-supported streaming service, because employees fear the clunky name is a drag on sign-ups, The Information reports. The waffling between IMDb TV, Freedive or some variation of Free TV is amusing. But perhaps the most interesting morsel comes at the very end. “While the business continues to be part of Amazon’s advertising unit, reporting to Amazon’s head of advertising, Paul Kotas, some employees wonder if it will get folded into Amazon’s entertainment business under Jeff Blackburn.” The head of IMDb TV and the head of business for the division both departed in recent weeks, so it’s a moment when the org chart could be reshuffled. Whether IMDb TV fits best in the advertising or entertainment division is an important question. New AT&T CEO John Stankey got rid of advertising as a third pillar of the business (which used to include a trifecta of telco service, media and entertainment and advertising) and folded the group into Warner Media. The Xandr ad tech unit was then spat back out when Warner Media merged with Discovery in May. IMDb TV is quietly a golden goose for Amazon’s CTV supply – and since programmers can list shows or movies on IMDb TV (if they agree to Amazon’s revenue share, of course), it’s a potential onboard for international content. Today, Netflix or Prime must produce foreign-language programs or acquire the rights one by one.

Everyone’s freaking out about the supply-chain crisis – but at least six ad execs Digiday spoke to say there’s really no need to panic. Just because marketing commitments are held back doesn’t mean they’re lost for good. Rather than setting their hair on fire, advertisers should think about where to reallocate – and when to do it. Getting the timing right is the tricky part. Performance agency Threepipe Reply has clients phasing their ad spending throughout the quarter. Although some clients have curbed budgets, particularly related to tentpole events like Black Friday, they’re already thinking about where they can reinvest later in the quarter. “Maybe that’s running at a lower margin or maybe that’s spending more in December when the media environment is traditionally cheaper,” says Farhad Koodoruth, a partner at Threepipe Reply. Still, ad spending will be a bit like a game of chicken for the rest of the year. Because people expect product shortages, they buy early – and panic buying leads to more shortages. All the while, advertisers are trying their best to stay in front of customers as long as possible. But not so long as to empty the shelves.

A Store Of Value

Aside from the supply-chain migraine, retailers and ecommerce companies are rethinking their holiday strategy this year due to the diminished effectiveness and higher costs of online advertising. Facebook (Meta, whatevs) and its apps in particular are getting less attention from retail advertisers this year both because of Apple’s privacy policy and its own PR controversies. This should have been a banner season for Facebook. The ecommerce-native brands Allbirds, Warby Parker and Solo Brands (which operates DTC companies such as Solo Stove, Oru Kayaks and Chubbies) all IPO’d in 2021, just to name a few. Casper, another DTC brand with Facebook in its blood, went public last year. But the maturation of early DTC standouts isn’t necessarily a boon to Facebook. “When you first launch [a brand], it might be cheaper to acquire a customer via social advertising or via paid search,” Joe Kudla, founder and CEO of the digital-native activewear brand Vuori, tells CNBC. “But then when you’ve acquired your millionth customer, it actually might be much more cost effective … through a store.”

How Hollywood’s biggest stars are losing their clout. [The Economist]