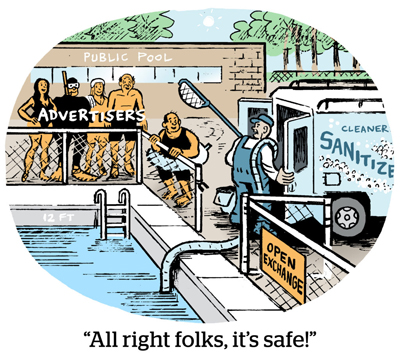 The ad tech consultancy/watchdog Check My Ads made that case at SXSW last week, Fast Company reports. According to the group’s founders, the disinformation crisis is solvable but will require ad exchanges to freeze bad actors out of the RTB system.

Social media platforms like Facebook bear most of the responsibility for the internet’s reputation as a safe haven for propaganda. Some of the most popular and widely shared pubs (or, shall we say, so-called pubs) on Facebook are all about one-sided coverage intended to rile up audiences around hot-button cultural issues.

Check My Ads defines misinformation outlets as those that ignore journalistic best practices like proper sourcing and issuing corrections for inaccuracies.

But even with all their popularity on social media, these would-be publishers rely on a handful of ad exchanges to monetize their sites and online accounts. Check My Ads typically petitions exchanges to drop disreputable publishers by appealing to their brand customers (whose inbound emails get prompt attention).

We (NBC) You There

NBCUniversal announced Dentsu as the first agency to sign on with NBCUnified, the first-party identity platform the programmer released in January. Dentsu will match first-party data from its advertiser clients with NBCU’s data to create deterministic data sets that can be used for targeting, look-alike modeling and attribution.

“Identity is increasingly becoming the new currency for the advanced television and digital video industry,” NBCU Chief Data Officer John Lee said in a release. (Note the pointed use of the word “currency” – a shot across the bows at Nielsen.)

But … wait. Didn’t NBCU just make a similar announcement with another hold co? Why, yes, well remembered. On Monday, Omnicom was heralded as the first to use the NBC Audience Insights Hub, the broadcaster’s shiny new clean room, which launched last year.

That was the Silicon Valley joke a few years ago, writes Benedict Evans, a former Silicon Valley VC. Recall the heady days of Facebook-based DTC brands?

The same could have been said during the boom days of the American shopping mall, and it’s just as true now for retail and legacy brand sellers familiarizing themselves with the online platform economy.

Why run ads in a state if you don’t have stores there? That question used to make sense. But nowadays, advertising and sales have collapsed into one cost structure – and that sparks a lot of questions, Evans writes.

For example, do you get a better ROI on Instagram ads or on faster shipping? If you open a store in that city, do your returns go down? Is it more efficient to ship from the store, ship from a warehouse, offer BOPIS, or close the store and just put that budget into TikTok? Do we have more brands, because they’re no longer constrained by physical inventory and marketing and can therefore target by region or target demographics that may have been uneconomic for physical retail? Or do we have fewer because brands need to concentrate on a smaller number of bigger names that have more awareness?

Some news organizations are lifting their paywalls and creating new channels to make information on the war in Ukraine freely available to readers there and in Russia. [Digiday]

Why Hollywood is souring (somewhat) on streaming. [Puck]