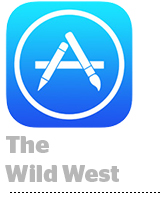 Verizon is inching away from the grand advertising ambitions it once had for Oath. The ad unit has a new chief, Guru Gowrappan, following Tim Armstrong’s departure in September, and Verizon CEO Hans Vestberg, who took over in August, is more interested in network infrastructure than media. And after failing to meet ad revenue goals, Oath executives are now “focused on selling content subscriptions and giving users ways to make purchases through its sites,” reports The Wall Street Journal. It could mean big changes for media properties like HuffPost, one of the internet’s top free digital news and aggregation companies, which is exploring subscription and paywall options. But it’s all marginal to Verizon’s overall goal of being the first and best in 5G mobile networking, while AT&T places its chips on addressable advertising.  More.

Apple’s App Store is still easily gamed by bad-faith apps, writes David Barnard, an independent app developer and blogger. Some tactics are difficult to police, like paying people to use a specific search term and then download your app, thus teaching the App Store algorithm to favor your app, or implementing a tricky subscription page. Others are preventable: apps sharing location with third-party vendors, prompting custom reviews or buying fake ratings and reviews in violation of Apple policies. “They don’t seem to penalize apps that do it so ¯\_(ツ)_/¯,” Barnard writes. Apple isn’t hard-pressed to improve because the Google Play Store, its main rival, is much more lax on advertising and ad tech. “If the financial incentive to build and maintain great niche apps dries up, the beautiful and diverse forest of apps that is the App Store will slowly start to look more like the unkempt Play Store.” More.

Marriott revealed Friday its Starwood reservation system was hacked, exposing the personal data of up to 500 million guests who had shared credit cards, addresses and passport numbers with the hotel chain. The attack, which was discovered in September but stretches back as early as 2014, is one of the largest known thefts of personal records and “has the potential to trigger the first hefty GDPR fine” against the hotel chain, said Enza Iannopollo, a security analyst at Forrester. Several lawsuits were filed against Marriott on Friday, including by European regulators, The New York Times reports. More.