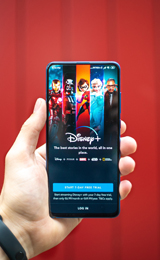 The Walt Disney Co. faces a moment of truth next week with the first anniversary of its launch of Disney Plus, The Information reports. This is when Verizon customers who signed up for the service through a one-year free promotion have to start paying or cancel. And that is prompting worries among Disney executives that a large number of subscribers will cancel, according to a person familiar with the situation. Verizon subscribers account for about 15% of Disney Plus’ 60 million subscribers. And the Verizon group watches the service less than other subscribers. With that in mind, Disney is releasing as much as possible this month of its best content, such as the second season of “The Mandalorian.”

YouTube creators are seeing an increase in connected TV viewership. As Digiday reports, in the third quarter of 2020, CTV represented 34% of the time people spent watching YouTube videos across entertainment studio Collab’s network of more than 300 YouTube channels. That’s up from 27% in the fourth quarter of 2019. Contributing to the CTV share increase is the fact that people spend more time, on average, viewing videos when watching on CTV vs. other types of devices. “What we have is a generation of consumers who have been trained to think of YouTube as a TV solution,” said Dave Rosner, EVP and head of marketing at Collab. Still, although CTV’s share of YouTube viewership is growing, mobile remains the dominant device type. Across Collab’s network, mobile represented 41% of watch time.

Brands On The Hunt?

Some brands may be on the hunt for new agencies over the next six to 12 months, according to an Adweek Intelligence survey. Nearly 60% of brands have cut their agency budgets since the start of the pandemic, and almost 40% might look for a new agency, as agencies have spent much of 2020 scrambling to adapt to unprecedented and ever-changing obstacles. Still, for many, it won’t have been enough. According to Meghan McDonnell, president of consultancy Pile + Company, one main reason for the changes didn’t necessarily come in the first two months of the pandemic, but rather in subsequent months. “Both sides, agencies and brands, were trying to get their footing,” she said. “If there were issues in the relationship, those would become more apparent in May or June because that’s when clients were very much relying on their agencies to be a strategic partner to figure out what was next.”