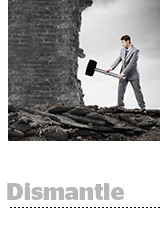 A growing chorus of media industry leaders, privacy activists and even legislators have called for anti-monopoly cases against Apple, Amazon, Google and Facebook. And those calls have only gotten louder since the European Union hit Google with a record-breaking $5.1 billion fine last month for anti-competitive behavior. But would a trust-busting case fly in US courts? In a new paper, former New York state antitrust chief Stephen Houck analyzes Google in light of the 2001 antitrust case against Microsoft, in which he played a role. He argues a break-up is exceedingly unlikely. “The advent of Android has dramatically increased consumer choice and created downward pressure on prices,” he writes. “There is nothing inherently wrong with bundling software and, to the extent Google has done so, a court is likely to consider it procompetitive not anticompetitive.” Read more at the Disruptive Competition Project.

The legendary Nintendo video-game designer who created “Super Mario,” “Donkey Kong” and “The Legend of Zelda” is pushing developers to kick their habit of offering free-to-download games with seductive microtransactions, which have driven record profits for gaming companies. “I can’t say that our fixed-cost model has really been a success,” Shigeru Miyamoto said at the Computer Entertainment Developers Conference in Yokohama, Japan, last week. Two years ago, when Nintendo launched “Super Mario Run,” its first smartphone app, it faced criticism and low adoption for charging what customers considered too high of a flat fee for a mobile game with relatively little content. Since then the industry has only gotten better at driving free downloads and nickel-and-diming users. But mobile gaming companies are toeing a fine line. In-game features like “loot boxes” have drawn scrutiny from lawmakers, as has the increasingly addictive nature of mobile games. More.

Google has quietly buried user-generated reviews for restaurants and local services, reports Yahoo News. “Given that reviews once showed up in regular Google search results and now do not, it follows that the reviews were moved from a web page to the Maps platform, whose code prevents search engines from crawling it.” Critics say Google is trying to obscure how low-quality its reviews are, since they wouldn’t organically merit the high placement Google has given its own local search products. More.