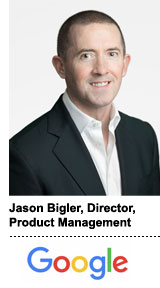 “With every change we make, we are providing visibility into the black box,” Bigler said.

Publishers told Bigler that when they made product suggestions, they weren’t sure if Google was listening. “Most of them have said, ‘When we ask you do things, it goes into a black box, never to be heard of again.’ I took that as a call to action.”

Like his predecessor Bellack, who took a role at Google’s Jigsaw in January, Bigler started at pre-Google DoubleClick. He left after the acquisition but returned a few years later after Neal Mohan, now at YouTube, tapped him for a role in the European market.

There’s been a lot of change around Google’s sell-side products since Bigler took over. During the spring, Google Ad Manager followed other exchanges and shifted to first-price auctions, and plans to complete the transition by the end of July. Publishers initially weren’t happy about the changes, which they felt didn’t acknowledge unique ways they’d customized their ad server.

Since then, Bigler claimed publishers have come around, in part due to one-on-one communications between Google and his team around the benefits of the new setup.

Bigler talked to AdExchanger about the coming “unified pricing” changes, the future of exchange bidding and why he welcomes the emergence of Amazon as a sell-side competitor.

AdExchanger: Why were you selected for this role?

JASON BIGLER: My experience, which is mostly on the buy side, brings a different lens to how you solve sell-side problems. This industry is fueled by ad dollars and how buyers think.

But I also haven’t been that far away from the sell-side business during my years here. We all participate in the same strategic planning sessions. I know Jonathan [Bellack] really well and he’s a good friend. That exposure and experience made it an interesting decision for the company.

What’s your vision for exchange bidding?

I don’t know if the vision has changed since we launched it. You’re going to get way less latency with a server-side solution, and latency to publishers is money. Rendering decisions faster will make publishers more money.

But we know our customers use header bidding. We will invest in solutions that will make it easy to administer, even if it’s alongside exchange bidding.

Has exchange bidding traditionally performed better because it got “last look” – which is going away?

It’s too early to say for sure what is going to happen with exchange bidding partners. We’re doing single-digit percentages. We learn some things at 1%, other things at 5%. You don’t get good bid density measurements at 1%, but at 5% they get better.

What metrics are you paying attention to as you test first-price auctions?

The win CPMs. The yield overall. Ultimately we believe the move to first price will generate better yield for our publishers.

You’re giving bid landscape data to publishers as part of this change. What can they do with the data?

They can better understand the value of the inventory, and how various players value it. That’s information that’s been withheld [by the advertiser]. When they start to get access to that from DV360 and AdWords, there is a whole new threshold of learning.

Publishers were upset about the unified pricing changes. What have you done to alleviate those concerns?

We have a very principled approach to making changes in the product, which is to engage early. We started to get reactions, and the reactions became a press cycle. As we talked to publishers, and got into the nitty gritty of how they could transpose their setups, then their reaction was “Oh, OK. There is benefit for me individually.”

What kinds of benefits?

The simplicity of their setups. Reducing operational costs. Yield. Being able to handle use cases they thought were fairly unique. You can’t discuss those nuances in an initial meeting.

The publishers we’ve spoken with by and large have gotten on board. We have people like the Times and The Washington Post that are saying, “Hey, this is actually good.”

What do you say to publishers who are worried that these changes could create a new hidden advantage for Google?

Building better feedback loops with our customers so the “why” is understood will go a long way toward providing transparency and help people feel like we have skin in the game. Because we do listen to our customers. It’s easy to say “Yes, that will be part of the next development cycle.” With no, we never explained why, [even when] it could be as simple as there being 10 other things they would also agree are more important.

Who’s better for publishers to work with – Amazon TAM or Google exchange bidding?

A competitive ecosystem is a good ecosystem for publishers. It’s not Amazon TAM vs. EB. In the Amazon example, they are a formidable competitor. They have great data. They have high investment in this area. Publishers should not necessarily worry about whether it’s a search company or an ecommerce company, they should worry about the value that can be created.