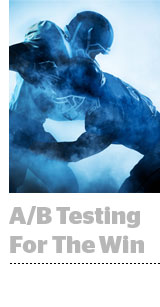 In 2015, Gannett started using a free tool from ShareThis to optimize Facebook posts by testing more than one headline or image at a time.

Since then the tool has significantly supported two goals: improving Gannett’s engagement on Facebook and driving audiences to USA Today sites such as sports property FTW.

“This allows us to bring some science to the art of producing content for Facebook,” said Jamie Mottram, head of social at Gannett.

ShareThis operates the “share” widgets on many sites, and is paid in the data it collects from publishers that install the tool.

Gannett’s content producers copy and paste an article link into ShareThis’ A/B testing platform, which then renders how the article will look in Facebook’s news feed. Editors can choose to test an alternate headline, image or description.

ShareThis’ tool then tests – using either organic or paid distribution – the content against a sample audience of the publisher’s followers.

Once a statistically significant sample sees the two posts, ShareThis picks a winner and automatically updates so readers only see the winning post.

On average, Gannett sees a 25% lift in the overall reach for the winning variation compared with posts that don’t use the tool. On Gannett’s FTW, Mottram’s team has even integrated the tool into its content management system. The site’s headline and images update automatically after the social media test runs.

Mottram enjoys the ability to tune the tool to Gannett’s business objective. “We were trying to grow our owned and operated website through optimization versus growing engagement on Facebook,” he said.

For example, some types of stories – like a headline about a team’s win – may garner tons of likes from its fans eager to show their support, but few clicks.

According to Mottram, the most viral story in FTW’s three-year history, “The Pro Bowl’s Kiss Cam became a powerful PSA about love’s different forms,” may not have broken out were it not for the A/B testing process.

The team knew the story had viral potential, but had a few ideas on how to package the content.

“Some of the guesses [for the images] we thought would be more effective – like two women kissing – ended up being refuted,” Mottram said. The story ended up getting 3.6 million views, 1 million of which came from social media, according to ShareThis data.

In the case of this story, Mottram suspects the lift far exceeded the 25% average for stories that go through the A/B testing.

“We felt good about the fact that we had rigorously packaged the story for Facebook,” he said. “How many of those [referrals] would we have gotten if we had not optimized for the news feed?”