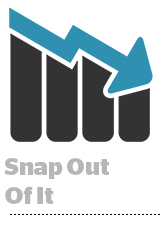 This year, eMarketer estimates Snapchat will bring in $662.1 million in US ad revenue, a significant drop from the $1.03 billion it had projected last March. “We now expect that Snap will not break $1 billion in US ad revenue until 2020,” according to the revised figures. The downgrade is mainly due to Snapchat’s sudden tilt from direct sales to programmatic, which precipitated a large drop in CPMs as inventory moved to the open auction, says eMarketer principal analyst Debra Aho Williamson. As long as the company can bolster its engagement metrics (no sure thing in the wake of its loss of 3 million daily active users last quarter), the programmatic turnaround will yield dividends in 2019 and 2020. More.

The sudden departure of Instagram founders Kevin Systrom and Mike Krieger comes at a tough time for Facebook and seems to have followed a period of rancor toward Mark Zuckerberg. Specifically, Systrom and Krieger were reportedly irate about Facebook’s decision to throttle traffic flowing to Instagram from the core Facebook app. “There was a feeling that Instagram could stand on its own two feet,” one Facebook exec tells NBC News. More. And the news has raised eyebrows on Madison Avenue, where ad execs are concerned that Instagram could lose its luster and keen instinct for young audiences, according to The Wall Street Journal. More. Adam Mosseri, Instagram’s head of product and the former head of Facebook News Feed, is reported to be taking over as Instagram CEO.

Who Can I Sue?

A group of the country’s top state and federal law enforcement officials gathered at the Justice Department in Washington, DC, on Monday to discuss potential tech industry regulations. No specific business practices or legal remedies were addressed in the meeting, but the formal partnership between state attorneys general and the federal government will allow “information sharing on separate litigations we have ongoing,” Mississippi AG Jim Hood tells The Washington Post. Industry observers feared the confab would devolve into grandstanding over search and social media political bias. But the state-level officials stayed on topic. “[The] AGs are really focused on understanding more as to what consumers are truly consenting to and what they may not know is going on with their data,” said Karl Racine, attorney general for the District of Columbia. More.