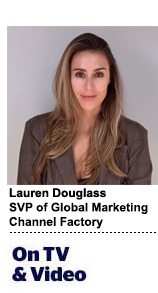 Today’s column is by Lauren Douglass, SVP of global marketing at Channel Factory.

TV and digital advertising remain siloed today despite the lines between devices becoming increasingly blurred. And now that YouTube has moved its YouTube Brandcast event to the same week as the Upfronts, the lines feel downright invisible.

A comedian I follow sums it up well: City Slickers (the movie starring Billy Crystal and Steve Martin from the early ’90s) made $180 million at the box office the year it was released. Today, the movie is likely buried deep within the search results of Paramount+.

According to a recent study by Leichtman Research Group, 82% of households in the US have at least one connected TV (CTV) device. That’s double the number that go to church and almost a quarter more than the number of Americans that voted in 2020. As connected TV increases in popularity among viewers, brands should follow them to the channel. This does not mean linear TV is dead. While finding a household that solely relies on traditional TV for content consumption might be a thing of the past, 51% of viewers find traditional TV and streaming services to be complementary to each other.

So is YouTube declaring the end of traditional TV with the timing of Brandcast? Perhaps it’s simply asking everyone to evolve their thinking and stop treating CTV and linear TV as two completely separate entities. People want both. It’s time for advertisers to consider this reality when they buy media.

What YouTube’s stand means for the advertising industry

Behind Netflix, YouTube has become the second-biggest CTV player when it comes to time spent watching. As of December 2021, YouTube reached more than 135 million people on connected TVs in the U.S., according to Nielsen estimates, and is primed to challenge traditional TV for ad spend. And for more than a decade, YouTube had been an anchor of the IAB’s NewFronts. So what’s changing now?

As mentioned, while it still plans to be a sponsor of the IAB event, YouTube recently announced it will host its Brandcast the same week as the TV Upfronts. This move can very much look like a “Hey, we’re not going away” message to TV traditionalists. But maybe it isn’t so much a challenge as it is a bridge between linear and digital aimed at helping advertisers reach more of their audience on the big screen.

CTV viewership is on the rise and is expected to continue on an upward trend moving forward, but that doesn’t mean traditional TV is dead. Online video consumption is here to stay, as viewers continue to increasingly turn to the big screen to meet their changing needs. In fact, they increasingly expect cross-platform experiences. Take the recent Super Bowl.

Although ratings were high via traditional TV, they didn’t break any records. Many users opted to stream instead – the average streaming audience was 10.5 million viewers. Not to mention the game’s biggest advertisements drove upward of 68 million views on YouTube.

Moving forward, ad dollars will need to be split between CTV and traditional TV. That is a lot easier to do when they are treated as one and the same.

If big CTV players like YouTube can find a way to bridge the gap, they should, even if they are met with resistance from traditional TV advertisers. At the end of the day, in order to have success within the advertising industry, there needs to be an understanding that things change.

Brands and advertisers need to adapt in order to align strategies and reach consumers where they are. Programming is programming – whether that be the latest season of The Voice or YouTube shorts featuring Marques Brownlee.