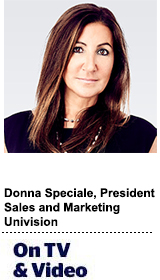 Univision is launching PrendeTV this week, its free ad-supported service exclusively for Hispanics, part of a growth strategy that includes ramping up content and rolling out new platforms and automated solutions.

PrendeTV will be the first premium Spanish-language AVOD service, and the announcement was made during Univision’s “A New Vision” virtual event on Wednesday. During the event, aimed in part at showing marketers the value of reaching Spanish-language audiences in streaming, the company outlined an ambitious agenda to build out its platform and expand its audience reach.

The presentation came a year after former Viacom CFO Wade Davis took over the company and, as CEO, reorganized its executive leadership team, which included bringing on former WarnerMedia ad sales chief Donna Speciale to shake things up and help chart Univision’s future. That includes unifying its linear and digital advertising capabilities while also leveraging data and analytics, with a greater focus on audience targeting.

AdExchanger: PrendeTV seems like a huge focus or you. Do you approach the streaming advertising opportunity differently than you approach linear?

DONNA SPECIALE: I think it’s a combination. I’m really thrilled that this was part of Wade’s vision when he bought the company. He knew obviously … watching what was going on with consumer behavior, it’s something you just have to have. I really believe that audiences want a free service. I look at this as an extension to our company and it’s basically bringing a whole new broader reach to our portfolio.

How do you think about the relationship between linear ad sales and AVOD ad sales?

I see it as one holistic company. To me it’s all of our content on all our platforms, whether you want to buy and reach our audience in linear on Univision, UniMás, Televisión, TUDN, it’s also now an extension that you can go to PrendeTV and go to a different audience. Think of it as having the purview of the entire US Hispanic audience across all of the audience segments. I think as [streaming] grows, it’s going to be reaching everybody.

If you could wave a magic wand, what is the one thing you think would help bring the worlds of linear and digital together in the eyes of ad buyers?

Two things have to happen: All the advertising needs to basically be audience targeted and much more audience focused, and get away from our traditional demo guarantees and gender. It will level the playing field across whatever platform you want to do.

By building our systems and capabilities to be cross platform, it becomes one holistic conversation. Our goal is to take all of Univision across all of our platforms, which includes linear and digital but it also includes local and national. It doesn’t matter if it’s national or local. To me it’s content across all our platforms.

Are the audience targeting opportunities different when you’re focused on the Hispanic diaspora versus the general populace?

It is because you start at a different place. The Hispanic audience is a segment in itself. You already start in getting much more precise of who you’re trying to target. But then you have to do the overlay just like you utilize when you’re doing general market. If you’re looking for an auto intender, it doesn’t matter if it’s a general market, or if it’s Hispanic. An auto intender is somebody who wants to buy a car — it’s that same consumer and person you’re trying to reach.

Right now, addressability is all the buzz. What role do you think audience targeting will have five years from now? Is it all going to be audience targeted, or will there be a place for demo-based buys?

There will be a combination. Audience targeting is getting to addressability — and addressable right now seems to be the topic of conversation. But it’s not scalable and it’s definitely in a testing mode. We have a long way to go in the addressable space. The infrastructure is just not in place for it to be scalable. That is the holy grail. That’s where we want to go because I think having much more precision in marketing is much easier and much better for clients to build their business outcomes.

Now, I also think that there is going to be marketing that you still want in order to do broad reach. When you’re buying the Super Bowl, that’s a much broader reach conversation.

How addressable do you think the TV industry can get? Can we build at the individual level or will it remain at the household level?

I think the goal is to get individual [level]. I think it really depends on how precise each client wants to get.

It feels like a bunch of different walled gardens are going up. Do you see that being the case, or are we eventually going to have some sort of pool of inventory?

I’m not sure if there’s going to be this pool where everybody just puts all of the inventory. And that doesn’t mean that we won’t put some of our inventory in programmatic areas … but there will always be inventory that we all control ourselves.

Some of your competitors are really going after the DTC advertisers who may not be traditional TV advertisers. Are you picking up traction there?