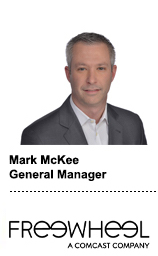 Mark McKee took on the general manager role at FreeWheel at an industrywide inflection point.

The advent of streaming and programmatic campaign activation parceled TV inventory into nesting dolls of options. Because audiences are fragmenting, the TV industry must evolve beyond the traditional direct I/O model to support thousands of buyers who have thousands of places to buy TV inventory, according to McKee.

To keep up to speed, publishers need new ways in which to aggregate their inventory and transact – and they need the right technology to connect with buyers and take advantage of growth in streaming.

The “antidote to fragmentation” is connecting the end points through fluidity between content, audiences and the ways in which to buy, he said. And consumption via streaming goes hand-in-hand with addressability.

To make TV convergence a reality, McKee plans to bolster FreeWheel’s role in the ecosystem as a player in cross-platform TV standardization and automation, while drawing harder lines between the company’s technology and media solutions.

AdExchanger: How has the company changed since you joined FreeWheel in 2018?

MARK MCKEE: Over the last four years, we’ve evolved from a software company to a monetization solution platform. Our role has grown beyond ad serving and campaign stewardship – those are important and needed, but they’re point solutions.

As a platform, we need to work seamlessly with every technology and solution on the market, which includes working with different data and measurement providers in addition to SSPs and DSPs. This puts FreeWheel in a position to support the TV industry’s evolution toward automation.

Will your leadership continue or pivot FreeWheel’s business strategy?

Our focus as a company isn’t changing drastically. FreeWheel has always been seen as a software company. But we want to clarify our role in the ecosystem for our customers and help change the perspective of what it means to be a platform company, which calls for more than just a one-off type of solution.

It’s a pivotal transition, but not a departure from what we’ve already been doing.

How does the AudienceXpress rebrand tie into this transition?

It’s really its own division of FreeWheel – there was confusion about our branding, so the regroup is how we’re making sure the roles we play across the ecosystem are clear.

AudienceXpress uses FreeWheel’s software, but it’s really more about media solutions than selling software. It’s mostly a managed service. In some cases, we can do programmatic, but it’s a very different business model and market offering, which is why it’s important to brand them separately.

How does FreeWheel distinguish its CTV strategy from its linear addressable model?

Our Strata software links to connected TV inventory to bring that same workflow mechanism to over-the-top video. It allows buyers to create a plan for incremental reach based on all of the inventory available to them in not just linear but in CTV and digital environments.

On the addressable side, we’re the underpinning for publishers. Many of our premium publishers are much more heavily invested in addressable scale than they ever have been in the past because of fragmentation. We’re anchored in core technology that connects multiple MVPDs and end points into one decisioning engine. And we’re doing this by collaborating with data providers like Canoe in addition to MVPDs and programmers to help publishers aggregate their inventory aggressively.

Will FreeWheel need to match its CTV capabilities with those of addressable linear?

Yes – we need to be able to do both. Our clients on both the buy and sell sides are asking us for convergence.

The challenge is fragmentation and working multiple paths. We have to make advancements supporting CTV, but we also have to make advancements in monetizing CTV and creating the right partnerships to be able to take into consideration all of the new end points emerging in addition to the traditional ones. Not to mention all the investments into our product and engineering teams needed to make it happen.

What’s currently the biggest misconception holding the TV ecosystem back?

Thinking whatever works for display works for premium video.

Marketers who approach TV with a digital media strategy are probably operating in fear because they see themselves as part of a race to the bottom [of the purchase funnel]. Digital display generates billions of impressions per day, but TV has a much more confined amount of inventory and an audience that expects a more preserved experience [with a light ad load].

Inventory scarcity creates different rules – it makes yield management strategy for TV very, very different from that of digital, so the biggest piece of collateral damage for the TV ecosystem is the assumption that old tried-and-true methods will be instantly applicable to premium video just because they’ve worked in other media sectors.