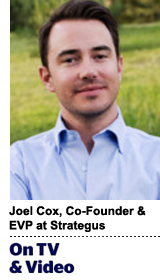 Today’s column is written by Joel Cox, co-founder and executive vice president of strategy and innovation at Strategus.

Before the COVID-19 outbreak, many people had already spoken: They want to consume their television media on their time and terms over the internet. In its February report to shareholders, Roku predicted that half of US homes would cut the cable and satellite cords by 2024.

This is accelerating now, with more people under stay-at-home orders and watching TV. They have more time on their hands, less money for subscriptions, no sports and less patience for negative cable news. They are going to watch ad-supported content, but with little tolerance for irrelevance and over-frequency.

For those who weren’t already on board yet with programmatic OTT (over-the-top) connected TV (CTV) advertising, now might be the time to make a move. Nielsen is forecasting that Americans are watching 60% more television. We’re seeing a surge in available inventory and lower eCPMs. Rather than lock in contracts at a set CPM, transacting programmatically allows brands and agencies to take advantage of real-time market shifts like this, where more Americans are streaming at lower costs than we’ve seen in years.

The pressure is on. Will marketers go all-in on OTT? Brand safety and quality concerns have been key factors that have kept some on the sidelines, as well as challenges transacting within walled gardens. But these issues are being addressed with more sophisticated inventory vetting, limiting media buys to premium, long-form content and by prioritizing inventory agnosticism.

Many brands and agencies still cling to a content-centric tradition, refusing to give up their assumptions and anecdotes, partly due to lack of inventory transparency. Some say Hulu won’t always tell them where their ads are served, for example, while others warn that YouTube’s worst brand-safety issues scared many advertisers back into the content comfort zones of the past.

Starting from the last time this many families were sitting together watching the same shows, transparency and brand safety were built on public trust of broadcasters’ editorial oversight of family-friendly programming, pumped into living rooms over public airwaves and later cable feeds. Ads were served across broad swaths of conformist content based on generic demographic assumptions. With today’s channel fragmentation, any remaining standards for controversial or inappropriate content are no match for the proliferation of paid-subscription streaming platforms or the unpredictability of free ad-supported digital programming apps.

It’s human nature for media buyers to seek comfort zones and less risk. But edgy content and substandard production standards in the Wild West of OTT and CTV digital streaming can be addressed with vetted inventory and programmatic blacklist and whitelist algorithms that weren’t available just a few years ago. This matters more now that more kids are at home.

But one of programmatic’s advantages is the ability to apply contextual blacklisting. Campaigns can avoid adjacency with depressing news content, for example, and construct custom-curated inventory that’s all comedy.

Silos never play well with others, and new streaming platforms appear constantly. If marketers are not transacting programmatically into curated private marketplaces of ad-supported streaming content, and instead approaching it traditionally by calling a Hulu, Pluto, Peacock or Sling rep, they’re going to get sticker shock. And with millions out of work, adding more subscriptions seems less practical while AVOD services seem more attractive.

But programmatic offers the ability to custom curate content and inventory across multiple AVOD apps and sources. Want to zero in on the news watcher with a quiver full of personal behavior attributes to measure and choose from? With programmatic advertisers can single out streaming news apps such as NBC, CBS and Newsy, rather than taking everything that Hulu has to offer.

With headlines blaring about new platforms, the death of the cookie or the latest brand-safety atrocity, some media buyers think it best to keep their TV buys static. But programmatic CTV campaigns are improving rapidly in the critical areas of transparency, visibility, performance and attribution. Audience targeting and ad relevance are getting much better, paid-subscription fatigue just got more intense, and ad-supported content is not going away anytime soon.

There’s more programmatic inventory out there than ever. Brands and agencies need to reach consumers where they are, and right now they are exploring, discovering and narrowing their digital streaming viewing and spending habits during this historic moment of societal evolution.