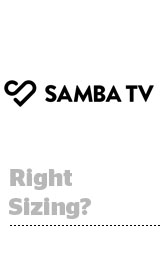 Sources tell AdExchanger that the layoffs represent somewhere between 15% and 20% of the company, although more toward the lower end of that range. Samba confirmed the layoffs but declined to share how many people or what specific roles were affected.

The layoffs were global across the company, rather than in any one region. Samba has 13 offices, including its San Francisco headquarters.

Samba’s headcount was roughly 350 as of August.

According to Samba, the layoffs are part of a reorg that will help the company focus on its two most promising product lines: audience and data. Samba promoted two executives from inside to lead those teams.

Marc Bourget, GM of connected TV, will become SVP and head of audience products, while Ken Mallon will go from SVP of measurement sciences to SVP and head of data protects.

In an email obtained by AdExchanger that was sent to all employees following an all-hands meeting on Wednesday, Samba CEO and co-founder, Ashwin Navin, noted that audience and data are the two categories that will “fuel the future of Samba and drive the most value for us.”

Samba’s audience product line will tap into the data generated from its footprint of smart TVs, while the data products will be focused on making TV viewership and ad exposure data available to clients to help with analytics, planning and measurement.

For the past year, Samba TV has been on an acquisition spree, snapping up startups to enhance its TV viewership data and measurement capabilities in an effort to take advantage of the fast-growing opportunity around connected TV.

Navin claims that Samba’s CTV advertising business grew by more than 50% year over year, and that the overall business has been profitable for the past three years. But the company was getting sidetracked by too many moving parts.

“We have to stop doing certain things that would distract from capitalizing on the opportunities at hand,” he wrote in the email to employees. “We need focus.”

Samba, for example, is planning to migrate its data centers to the cloud and concentrate on using the assets it acquired through Screen6 to build an identity graph rather than building a graph of its own.

Each deal was a steppingstone to achieving Samba’s vision, which Navin previously described to AdExchanger as the ability to combine identity resolution, TV viewership data, TV spot analytics, activation and measurement into a single solution.

Navin told employees that the company vision is still the same despite having to “part ways with some very talented colleagues.”

The ad tech TV category is hot, and companies are starting to put their stake in the ground, as evidenced by LiveRamp’s $150 million acquisition of TV analytics startup Data Plus Math in June.