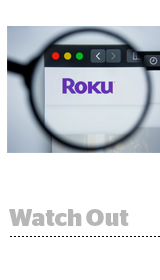 The streaming wars are heating up, and Roku is on a tear.

Average revenue per user was also on the rise with a $2 increase quarter over quarter to $21.06. ARPU is up 88% in the two years since Roku’s IPO.

Roku is also increasing its full year 2019 outlook based on its good quarter. The company now expects to grow revenue by 46% to $1.1 billion. Previous guidance was 40%.

A big part of Roku’s success this quarter – and a linchpin of its monetization strategy – is the Roku Channel, the company’s own free ad-supported streaming channel, which Roku stuffs with thousands of movies aggregated from other publishers on its platform and with content licensed directly from studios.

Roku-monetized video ad impressions more than doubled YoY, which was a major driver of revenue growth in the quarter.

But that’s not an invitation to overdo it on ad load.

It also lets advertisers buy the way they want to buy. That was a motivating factor behind Amazon’s recent move to open Fire TV video ad supply to outside demand sources via The Trade Desk and dataxu.

But Roku has been doing this sort of thing for a while, said Rosenberg, pointing to Roku’s universal advertising framework and integrations with more than 40 demand-side platforms.

“We think operating an open, data-driven ecosystem is essential to the success of OTT advertising,” Rosenberg said, “and we’re highly committed to it.”

Be that as it may, programmatic is not the majority of ad sales today, although it’s starting to pick up steam as a revenue driver. The company didn’t share specific numbers.

“We’re big believers in programmatic and automation more generally,” Rosenberg said. “And we think our programmatic offering is uniquely situated in terms of the premium broad reach it can deliver, as well as advanced proprietary targeting and because of the data we have as a platform.”