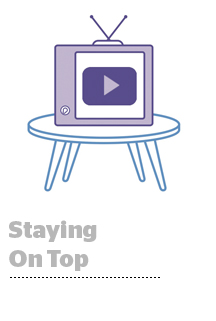 Video delivered over the internet to a smart television or connected TV could have a brand safety problem.

We’re talking specifically about user-generated digital video streaming to a big screen and the niche OTT channels and streaming services that seem be springing up on a near-weekly basis.

That type of video shouldn’t be confused with premium stuff from Hulu or Amazon Prime – although the two sometimes get lumped together, said Adam Moser, Hulu’s head of ad ops.

“The questions we get asked reflect the issues marketers have out there with digital video in general – and that’s understandable,” Moser said. “Different publishers believe they’re solving the problem in different ways, but we’re not there yet as an industry.”

OTT is at the “canary in the coal mine” stage, said Joshua Lowcock, global brand safety officer at UM.

“The scale of the problem isn’t significant today,” he said, “but there’s always the potential for issues to occur at scale if we aren’t proactive.”

Most of the ad availability across OTT is associated with older TV shows or movies and comes from known publishers, said Andre Swanston, CEO and co-founder of over-the-top data provider Tru Optik.

By the same token, YouTube isn’t any more or less dangerous depending on where a video is being consumed, Lowcock said.

“Think of a pure-play OTT channel, for example, with opinion-based content featuring talking heads and a loose definition of what I would call the news,” he said. “In that case, brands are exposing themselves to the very same challenges that exist more broadly on the internet.”

Advertisers get the same brand safety controls across YouTube regardless of whether a video plays on a phone or through a connected TV app on a big screen in someone’s living room, whereas OTT services served up through streaming sticks and on smart TVs are consumed in broadcast environments but aren’t regulated like broadcasters.

Device fragmentation, explosive growth in the OTT video market and the arrival of “non-premium channels” in IP-delivered environments create a risk for advertisers who don’t learn from past mistakes with digital media buying, Lowcock said.

“If you’re chasing customers or a specific audience, you run a risk no matter where your ad appears – unless you put the right controls in place,” he said. “The more you buy, the more you expose yourself to possibly buying in an environment you don’t want to be in.”

Misfired household targeting on YouTube might cause an inappropriate ad to pop up as pre-roll before a cartoon video meant for children, for example. A platform like Roku can sometimes be the conduit to a wide world of niche channels, some of which may not jibe with an advertiser’s brand safety guidelines.

But although there’s an inherent difference between short-form online video and Golden Globe-winning lean-back long-form, the same ad buying ethos should apply.

“OTT content has become prolific – it seems like a week doesn’t go by where we don’t read about the growth of OTT platforms and the distribution devices they appear on,” said Hulu’s Moser. “Media buyers may be discovering problems on some of these platforms, they may be looking broader than they should be.”

Programmatic audience-based targeting, as in any environment, could spark a brand safety challenge for internet-delivered video content, especially across the less premium stuff out there, said Dave Hahn, chief strategy officer at Integral Ad Science, who noted that IAS is working on a measurement product for OTT, which he sees as the bigger challenge in over-the-top.

Rather than fretting about the difference between flavors of OTT environment, advertisers would do better to figure out their risk tolerance level, create channel whitelists or blacklists to reflect that preference – and then remember that those lists are just blunt instruments.

At least for now, it’s not yet possible to identify specific show content in real time for programmatic buys. OTT is going through its “progra-manual phase,” Lowcock said, “and you either buy into an environment or you don’t.”

An advertiser can specify it only wants ads to run on specific sports channels, say Fox, CBS Sports and ESPN, but if that brand doesn’t want to be near football content for whatever reason, perhaps because it’s violent or doesn’t align politically, there’s no easy way to make that happen in a programmatic environment, Tru Optik’s Swanston said.

“If you’re advertising on sports channels and they have a ‘SportsCenter’-type show with football highlights, there’s just no way not to run against that,” he said. “But those decisions are about what that specific brand considers safe or not.”

Lowcock advises that advertisers log in to their own smart devices and navigate the vast number of standalone IP services out there to suss out where their brand sensitives lie.

“Scroll beyond the first screen of recommended channels and people will be surprised by what they find – the first step for anything is to be aware of informed,” he said. “At the same time, don’t let the notion of a potential brand safety risk hold you back from investing in these environments. This is where consumer attention is going, fast.”