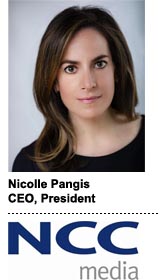 Nicolle Pangis, a former C-suite exec at WPP GroupM’s Xaxis and [m]Platform, has been appointed CEO and president of NCC Media. She will start May 29.

“That move lets us marry the scale of a national television business with an addressable business,” Pangis told AdExchanger.

Her previous experience at Xaxis and [m]Platform, where she helped build scaled data products, will apply to her new role at NCC.

These three elements need to work in lockstep.


To drive scaled demand from buyers, NCC needs lots of reliable, privacy-compliant data – and it must have the available inventory.

NCC also needs to figure out the mechanism to let agencies and advertisers buy the inventory. Pangis knows she’ll need more automation so that inventory can be purchased in a consistent way.

“Over the past several years, agencies and brands taking ownership of their buying want tools in their hands,” Pangis said. “Automation requires giving buyers the user interface [to transact] and give them complete transparency into what they’re buying, including the data being overlaid and how it was garnered.”

NCC is still working out whether it builds, buys or partners to create that platform.

NCC’s tip into addressability is a shift for the organization. For decades, it focused on linear TV sales, and it was the place to go to buy across all national markets. But data-driven TV targeting is going to intensify this year, according to Forrester Research.

There’s already been lots of organizational movement from broadcasters gearing up for data-driven buying. In April, Comcast subsidiary NBCU joined OpenAP. (Oddly, NCC is not a member of OpenAP, even though NBCU is.)

Pangis couldn’t say how much NCC inventory is addressable, but if NCC does its work, she anticipates hockey-stick growth.

“We’ll work with our buy-side partners to see what will make their lives easy to get to the supply,” she said. “We’re pulling data together in a privacy-compliant way. And we need to create more of the addressable inventory and put it on a single platform.”

How that inventory is bought – through a demand-side platform, private marketplace or direct guaranteed – is up in the air.

“Whether it’s an agreed-upon upfront or a spot buy, you need demand and supply on a single platform,” Pangis said.

Right now, NCC operates more like a traditional TV marketplace, with buyers purchasing based on DMAs or inventory availability. But as the inventory becomes more addressable, NCC hopes to offer more impression-level opportunities.

Pangis will replace NCC’s previous president and CEO, Greg Schaefer, who said in February that he would retire.