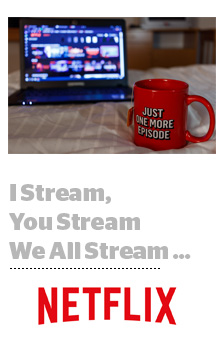 Attention, broadcasters, SVOD services and tech companies in the midst of launching a streaming subscription service (or thinking about it): Netflix doesn’t consider you to be competition.

“We compete so broadly with all of these different providers that any one provider entering only makes a difference on the margin,” Netflix CEO Reed Hastings said Thursday when discussing the company’s Q4 2018 earnings during a group interview led by UBS analyst Eric Sheridan.

[Netflix has a novel format for its earnings calls. A single investor is invited to question a handful of Netflix executives during a livestream (natch) on YouTube.]

So, who does Netflix compete with? The answer is more of a “what” than a “who.”

Netflix considers time its main competition. There are only 24 hours in the day, and some of those must be spent eating, sleeping, playing Fortnite and watching “Game of Thrones.”

“I think about it really as us winning time away from entertainment, from other activities,” Hastings said.

God help us all: TV screen time in the United States clocks in at 1 billion hours every day, according to Netflix’s estimate. That translates to nearly 115,000 years worth of screen time, which includes everything from entertainment to gaming to linear.

Netflix claims 10% of that, meaning 100 million hours of content consumption through its platform daily.

“That is why Disney – they have great content and we’re excited for their launch – maybe they grow over a couple of years to 50 million hours a day, but that’s out of the billion,” Hastings said.

The 10% stat is interesting because it’s both a bold and somewhat sly claim. Hastings is simultaneously putting TV broadcasters with streaming ambitions on notice and alerting Wall Street that Netflix still has a lot of room left to grow, even in a saturated market like the United States.

Netflix has always been rather tight-lipped about audience numbers for its content. Now, it seems like Netflix has decided to remove the blindfold.

Since the mid-December release of its Sandra Bullock thriller “Bird Box,” 80 million accounts have watched the film (or at least 70% of it, which is how Netflix defines a view). That number was 45 million a week after the release.

But the less flashy fare is raking in the views, too. A Spanish teen crime series called “Elite” topped 20 million member households within four weeks, while “The Protector,” a Turkish fantasy show, reached 10 million accounts over the same period of time, as did two dramas: “Bodyguard” in the United Kingdom and “Baby” in Italy.

Although Netflix is spending billions on its original content, it still earmarks boatloads of cash to license popular content from legacy media companies – and the price tag is going up.

The platform recently paid AT&T’s WarnerMedia $100 million to retain the rights to stream reruns of “Friends” throughout 2019, a huge hike from the $30 million once paid for access to the show.

But hey, now WarnerMedia has plans for a streaming service of its own. And not only did the price for “Friends” increase, there’s no telling whether Netflix can retain the rights next year.

Netflix isn’t surprised by this development. That’s why it started investing in original content around six years ago, Sarandos said, because it “was betting that there would come a day when the studios and networks may opt not to license us content in favor of maybe creating their own services.”

“That’s a corner I’m glad we saw around a few years ago, and today I’d say the vast majority of the content that is watched on Netflix is original content brands,” he said. “We are still a buyer in that second-run market … but it really is up to the sellers whether they want to continue to sell.”