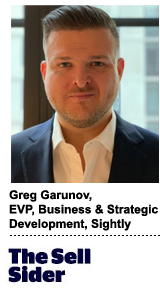 Today’s column is written by Greg Garunov, EVP of business and strategic development at Sightly.

But recent acquisitions, such as IAS’s purchase of CTV ad server and analytics company Publica for $220 million, are starting to blur the line. When did it become OK for ad tech vendors to grade their own homework?

My friend Zach Kubin, VP of sales at Adelaide, encapsulated the issue well in a recent LinkedIn post: “Congrats to the team at Publica who have bootstrapped their way to quite an exit … but I have some hypothetical questions about this … Like, what happens when a company has to measure the media that they now own and the person in charge of yield is getting yelled at by a sales guy who’s just trying to hit his quota? Or what could possibly go wrong when a large, public company that’s accountable to shareholders starts checking its own homework?”

When buyers hand over their media budgets and say, “Here, do your thing,” they don’t necessarily realize the extent to which the backend mechanics work toward the publisher’s or the tech platform’s goals. True, the seller promises to put the buyer’s interests first, but public companies are obligated to prioritize the interests of their shareholders – and that means maximizing their own revenues.

This is precisely why media buyers rely on measurement companies to have their backs. The question is: Can buyers still trust that the media ecosystem is delivering on its promises?

Automation has led to opacity

Advertisers and their agencies have always been keen to ensure their ads are delivered as anticipated and that buyers are able to maximize whatever business outcomes they want to achieve.

But in the early days of digital advertising, ad measurement was limited and largely manual. Buyers went through media plans line by line to find placements delivering the best results, and then instructed the publisher or tech platform to allocate more dollars toward those placements.

Automation was urgently needed. But with it came opacity.

Over the past 20 years, the industry has become enamored with the notion of “secret sauce.” Every publisher or media platform selling ad space has its own unique algorithm that governs the way its site functions. Their goal, understandably, is to maximize revenue per ad shown.

Complicating matters further, many sellers aren’t quite sure how their company’s backend mechanics work – maybe a hard pill to swallow, but it’s true – and this makes having a forthright conversation about how a campaign will be delivered almost impossible.

Heed the lessons of other sectors

In 2008, we saw the dangers of too-cozy relationships. At issue: Banks paid ratings agencies to grade their complex bonds of subprime mortgages. Not surprisingly, most of them received AAA ratings, prompting institutional investors such as state pension funds to invest in them.

Ultimately, this unhealthy dynamic brought the economy to its knees. Many states continue to struggle to meet their pension obligations.

While the digital advertising market is just a fraction of the total economy, there are still trillions of dollars at stake – to say nothing of the trust that advertisers have in the impartiality of third-party measurement.

Advertisers considered it dangerous and undesirable when the walled gardens graded their own homework. There’s no reason not to apply the same standard to other tech vendors today.