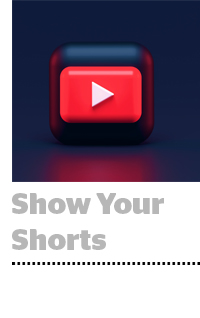 YouTube launched one of its biggest brand campaigns ever this week to promote Shorts, The Drum reports. YouTube Shorts, the aptly named short-form video format (i.e., a TikTok clone), have taken over consumption on the platform. Though that’s largely because YouTube is pulling all the levers it can to make Shorts a huge deal. Starting in June in the United States, and in India before that (Shorts first launched in beta in India), creators with viral Shorts content suddenly leapfrogged longtime YouTube leaderboard standouts to become the most-seen videos of the week. (Tubefilter COO Joshua Cohen has a worthwhile Twitter thread on the subject.) YouTube also started a yearlong $100 million Shorts fund in May to guarantee that creators with viral hits would monetize well. It’s a huge win for creators; Some Shorts videos with hundreds of millions of views came from archival posts that happened to be quick and snappy, which the creators tossed into the format. Creators can also repurpose content straight from TikTok (minus the watermark).

Integral Ad Science, which went public a month ago, acquired the sell-side CTV ad server and analytics company Publica for $220 million. IAS also bought the blockchain-enabled ad verification startup Amino Payments earlier this year, and the content recognition tech ADmantX in 2019, but Publica is a notable step into ad serving – not just analytics and verification. It remains to be seen whether IAS leans into that part of Publica’s business or keeps its hands clean of ad serving and campaign management. What IAS definitely does want are Publica’s contracts with CTV companies, including ViacomCBS, Fox Corp. and Philo TV, The Wall Street Journal reports. IAS has its roots on the buy side, with a large advertiser network. But it needs to be plugged in everywhere to be an effective ad verification service. “It’s the first inning of a long game in CTV,” said CEO Lisa Utzschneider.

Knocking Down The In-House Door

Acquiring talent has always been a challenge for brands that decide to take marketing in-house. But the odds are turning in brands’ favor, even during a tough hiring market, according to Morning Brew. The uncertainty of the pandemic made it easier for agency folks to take the plunge and go in-house. Other brands took their marketing in-house for work-life balance reasons, like escaping burnout and a desire to spend more time with family instead of working all hours, especially with work-from-home demands. Marketers also feel closer to a brand’s business performance, not just its media execution, when they switch – and get bonuses when they deliver.

Google to block targeting to kids based on age, gender, interest. [MediaPost]

Ibotta and MobileFuse partner on purchase-based targeting for CPGs. [release]

The gaming industry is taking off, but scandals scare some big-name sponsors. [Digiday]