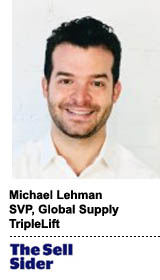 Today’s column is written by Michael Lehman, SVP of global supply at TripleLift.

Industry analysts project two advertising firsts this year: Political ad spend will reach $7 billion in 2020, and the 14-day period before the Presidential election will be the highest two-week digital political spend period in advertising, ever. And yet, despite all this money coming into the system, publishers and platforms, facing a historically nasty political season, are wrestling with the question of how their audiences will respond.

For advertisers and publishers, it is not the moment to sit back and let the algorithms work on their behalf.

Under normal circumstances, political spend in October would be treated as a surging, temporary category. But there are implications for both media companies and brands that make this year different.

Because of the tense, divisive political environment, the week or two ahead of the election will see some publishers partially or completely opt out of political dollars, and some brands choosing not to advertise.

So, who will be the winners and losers? Here are the competitive dynamics and three potential scenarios where October dollars need to compete.


The first scenario finds publishers leaning into political advertising over the next month. In this instance, should most brands continue to spend normally, there is enormous financial upside for publishers.

Beyond the sheer size of political budgets this season, with Facebook and Twitter not accepting political dollars in the last weeks of the election, programmatic channels will see a crush of highly concentrated, targeted and inelastic ad spend. Not only does this mean higher CPMs due to political spend, it means higher auction prices for brands set on delivering essential Q4 dollars as well. Ultimately, we would see higher auction prices for two categories: political dollars and seasonal brand spend.

Pressure for advertisers to deliver during that period will result in more money to digital publishers. Connected TV, in particular, is positioning itself as the ideal ground for political dollars – it offers a highly engaged audience in a brand safe environment, all the while being the ideal and less inflammatory counterpoint to social.

Should more publishers block political spend as the election creeps closer, those that don’t will benefit from these political dollars as they capture a larger share of voice and marry it with the traditional Q4 brand uptick.

This scenario yields considerable financial upside for publishers, and creates pricing pressure for most buyers.

The second scenario considers that some major brands will go dark as we approach Nov. 3. In this instance, the two weeks leading up to the election could represent one of the most compelling buying opportunities for direct response marketers and programmatic buyers of premium inventory in recent memory.

DR buyers will have the chance for better quality and earlier user session stock at a considerable discount. This scenario represents both an outstanding arbitrage opportunity for buyers and increased return on investment for advertisers. Publishers should communicate to their DR buyers – either directly or via their tech partners – that quality inventory is available for lower cost. If they don’t, buyers could miss the opportunity and publishers could miss the upside.

This scenario may actually yield the most ad spend and generate the most lucrative Q4 for digital publishers. Should big brands go dark for a few weeks ahead of the election, they will continue to have quarterly objectives and the flexibility to reorient that spend through the rest of the year. As a result then, publishers will capture lucrative political dollars, unexpected direct response dollars and the standard Q4 seasonal brand budgets.

This scenario represents the biggest win for publishers and big upside for performance media buyers.

The third scenario suggests that certain publishers will block political dollars entirely. Any media company employing this strategy is well aware of the economic opportunity cost, but will unlock two strong buying opportunities.

First: Programmatic buyers will not have to compete with the additional high auction CPMs political budgets are expected to generate. Second: Brands with advertising adjacency concerns will not have to run next to potentially inflammatory political advertising. Publishers should ensure they are communicating both of these opportunities to both their clients and tech partners, to ensure appropriate rules are set for their programmatic auctions.

Despite tapping into some upside, this scenario will yield the least Q4 ad spend as publishers focus on higher touch variables including the importance of protecting their user experience, the lifetime value of their users and competitive positioning against media companies accepting those political dollars.

What should buyers and publishers do?

It’s critical to build a flexible, weeks-long strategy to seize on this moment. Q4 has an opportunity to be even more lucrative than originally anticipated – for buyers and publishers. Direct response and performance spend generally decreases in Q4, as the low-price buying strategy cannot compete with Q4 branding budgets, so win rates fall with them.

Should performance buyers seize this opportunity in October, they might be looking at a historic opportunity to win big – call it Christmas in October. Publishers are potentially looking at an even more lucrative quarter, with huge political spend coupled with unusually high-performance dollars along with traditional Q4 branding spend.

It’s only a month, but the upside in October is meaningful enough to build a strategy that takes advantage of these dynamics.