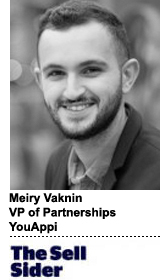 Today's column is written by Meiry Vaknin, VP of partnerships at YouAppi. After this exclusive first look for subscribers, the story will be published in full on AdExchanger.com tomorrow.

The mobile gaming market is set to grow 4.4% in 2021 to $90.7 billion. That’s slightly off last year's pace, but provides ample evidence that advertisers are still embracing mobile games as a top-tier media channel.

In this rapidly evolving space, programmatic in-game advertising has emerged as one of the best ways for marketers to take advantage of the new category opportunities while also navigating mobile gaming’s sometimes problematic past and complicated future.

Games account for roughly 43% of all smartphone use. Until recently, though, there was a common misconception that mobile gaming audiences were either too small or too niche to be of much interest to big brands. That perception has changed.

It’s little surprise, then, that media buying in mobile gaming has also grown. Agency giants Dentsu, GroupM, Omnicom and Publicis have all established divisions focused on gaming as more and more brands and advertisers push for programmatic channel integrations.

The gaming phenomenon is in no small part due to PCs and consoles, but most marketers see mobile as the real growth opportunity in the space and look at programmatic in-game advertising as the most sustainable ad business.

Technology and industry standards reached a turning point in 2020. Quality, targeted programmatic in-game ads are now delivered to millions of gamers safely and securely. This set the stage during the pandemic for a shift in mobile media buying habits. A recent report indicated that 93% of media buyers intend to run in-game advertising by 2025.

But this burgeoning media channel still faces a few hurdles.

The mobile industry has also worked hard to address issues related to viewability.

These and other improvements lend credence to the notion that mobile gaming is a top-tier media channel and programmatic is an effective way to take advantage of its promise.

The programmatic mobile landscape, though, has been roiled by changes of late. Chief among them is Apple’s new IDFA implementation, which created unanticipated complications within the space.

Publishers now need to rethink their strategies around how they can reach gamers.

Within the mobile gaming ecosystem, Android devices have emerged as a good way to capitalize on programmatic strategies in the post-IDFA world.

Seventy-eight percent of gamers identify as Android users, and budgets are shifting accordingly. PubMatic recently assessed the impact of Apple’s IDFA policy changes and found that mobile advertising budgets were already moving to Android devices. During Q2 and Q3, the share of mobile app budgets rose from 54% to 63% on Android, while decreasing on iOS from 46% to 37%.

For in-game advertising on iOS, creativity will now be the name of the game. The iOS 14 changes mean big adjustments for how mobile game marketers operate on Apple devices.

Brands won't have access to the type of data they still have on Android devices, which means their creative will need to be more dynamic in order to break through the clutter and engage users.

Marketers will also rely more on models and context. With less deterministic data accessible, they’ll need to focus on segments rather than specific user types and adapt to more contextual data in order to authenticate users.

Clearly, the landscape is evolving. But the size and scale of the mobile gaming audience and market can no longer be ignored.

In-game mobile advertising is at a tipping point. The undeniable growth of the category coupled with the laying to rest of long-held misconceptions should help programmatic in-game advertising push the category to new heights – regardless of the complicated mobile media environment we now find ourselves in.