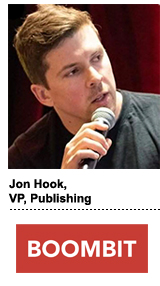 Considering the audience is anything but hardcore, the key to success in hypercasual is creating a game that’s snackable and simple to understand. The key components of a hypercasual game is that anyone can learn how to play in a matter of seconds and the actual game mechanics require minimal controls, often just one finger.

Hypercasual games, which mainly monetize with advertising, rather than in-app purchases, is a fast-growing market worth around $3 billion – a 33% YoY increase, according to research from ironSource.

Hook’s job is to liaise between BoomBit and external studios in the quest to build hit games.

“Think of hypercasual as a global content marketing platform,” he said. “And think of your potential audience as literally anyone.”

AdExchanger: You started at BoomBit just as the coronavirus crisis was hitting. What was that like?

JON HOOK: Some people on the outside often see gaming as a hobby, but what I love about it is that it’s incredibly professional, process-driven and efficient. We have email, Slack, Jira – we’re good. The whole gaming business is built on speed, especially in hypercasual. You have to get games out the door from iteration to testing to updates in six weeks. You can’t fall into the corporate bad habit of having a six-hour meeting and then a meeting about the meeting.

I’d say the hardest bit is trying to get to know everyone’s name. BoomBit is a Polish company. We have so many Mikhails, we use surnames. I’m not just having to write down people’s names, but phonetically how to pronounce them.

Why do you think hypercasual is such a big opportunity?

If you look at the Google Play charts right now, you’ve got all of these weird games, that almost aren’t games: “Blend It,” “Woodturning,” “Sharpen Blade.” And who are they aimed at? They’re not built for your typical gamer, they’re built for a mass consumer audience looking for a quick, feel-good experience.

But I’m interested in the next wave of hypercasual. I’m looking for the sleeping giants in this space.

Are you finding any?

That’s why I moved to BoomBit. They’re well positioned to build RPG [role-playing games] and puzzle games. They can bring in live ops to make live improvements to the game. It looks like hypercasual but it’s a more sophisticated style of game design. BoomBit has 150 people, their hypercasual games have more than 25 million downloads, they’re post-IPO, they’ve got cash, and they’re now starting to be on the radar of the ad tech supply side.

Hypercasual appeals to a mass audience. How do you reach them?

It’s about building internal cohorts and creating an ad experience specifically for you or specifically for me, because you like watching ads and will most likely never make an in-app purchase, whereas maybe I’m up for paying a small amount to remove ads, for example. All of a sudden, I become a super-interesting target.

As casual game studios see their MAUs continue to decline, they have two options. Either they have to create another hit game, which can take 18 to 24 months, or they have to hit the acquisition trail. It surprises me how slow studios are. Hypercasual is creating a problem for them, because we’re stealing all of their ad impressions. We drive up their cost per acquisition, because advertisers can get access to the same user with us for a fraction of the cost.

But hypercasual games rely almost exclusively on advertising to monetize. Is the coronavirus situation having an impact on that?

Given the climate, a lot of brands are pulling spend. But hypercasual specifically hasn’t been impacted very much, because we don’t get that many classic brands in our games. The best way to find hypercasual players is to advertise in hypercasual games. There’s a lot of cross-promotion. For hypercasual to really feel an impact, the entire gaming industry would have to tank massively. It wouldn’t be the coronavirus, it would be an iOS or Android virus.

What’s the best strategy for retention in a hypercasual game?

Before you even get to retention, you have to make certain decisions as a studio. What are you aiming for in terms of lifetime value? Is this a vanity exercise and you just want your game on the charts?

There are also many things in the game itself that can impact retention: the design elements, the background, the color of objects, how often you refresh characters, culturally relevant tie-ins to game play, such as St. Patrick’s Day or Valentine’s Day or Mother’s Day. You can add in extra levels or rewards. Little things like that can have a big impact on retention.

What about the ad creative you use with different target audiences?

It’s one of the biggest things that isn’t really talked about. The impact that creative can have on acquisition, retention and click-through rate (CTR) is unbelievable. My rule of thumb is to always build creative that is special for the channel. What works on TikTok is not going to work through AppLovin.

Think about where people spend their time: Instagram, YouTube and TikTok. You can get inspiration from the memes and themes you see there. On TikTok, for example, the cringier the creative, the better. We’ve seen three to four times the CTR from creative that would make sense nowhere else other than TikTok.

I’ve even seen the creative team playing around with how the fingers look in the playable ads we create. A man’s hand versus a woman’s hand or brightly colored fingernails can actually have a massive impact on the CTR.

You’re also an investor. What do you look for in the companies you invest in?

In gaming specifically, I’m looking for platforms that are enabling developers and publishers to automate all or part of their processes. I’m also looking for cool new game studios. I’m investing in a company now, for example, that’s trying to crack games on Apple Watch.