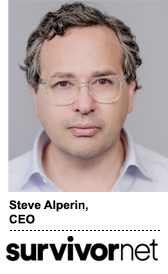 After this exclusive first look for subscribers, the story by AdExchanger’s Sarah Sluis will be published in full on AdExchanger.com tomorrow.

SurvivorNet’s first touch with its readers is usually at the beginning of a life-or-death experience – a cancer diagnosis.

Which means that SurvivorNet, a health resource for patients and caregivers, had to tread with the utmost caution and care when it developed a first-party data strategy.

The CEO of SurvivorNet, Steve Alperin, founded the site after he lost his father to esophageal cancer. He was haunted by the possibility that, because of information gaps, his father didn’t receive the right treatment at the right time.

“When you get sick, it’s too hard to figure out what to do,” Alperin said. Because of his background in the news business, he decided that he could help fill those information gaps.

SurvivorNet offers detailed health information to empower patients and their caregivers as they go through cancer treatment.

By Q2 of next year, SurvivorNet will have completely built a custom content journey for the 10 most prevalent cancers, which account for nearly 90% of all cancers.

When people receive a cancer diagnosis, they’re often deluged with information. SurvivorNet wants to make sure patients understand which of that information is most critical, such as the need to get a genetic test for their specific cancer before going straight into chemotherapy.

Newly diagnosed patients can sign up for a condition-specific newsletter series that sends 20 emails to guide them through their first 60 days post-diagnosis. SurvivorNet also developed a set of newsletter series aimed at caregivers and devoted to topics such as mental health, sexuality and specific medication regimes.

Patient stories play a major role in SurvivorNet’s custom content strategy, especially when it comes to timing the content correctly.

For example, hearing from people about what it’s like to go through chemotherapy before starting treatment can help alleviate a patient’s anxiety. With this in mind, SurvivorNet offers stories “one step ahead” of where a patient currently is in their treatment. Through polling its readers, SurvivorNet discovered that timing these articles correctly indeed makes people feel relieved about what’s ahead.

As part of its content experience, SurvivorNet has also added a bit of levity, asking readers, “Can I send you one thing a day that makes you smile in the morning?”

“A big part of what we do is offer hope,” Alperin said.

SurvivorNet uses “simple tools” in order to customize the content experience, Alperin said. He likes content analytics tool Parse.ly, because it allows him to see on which pages people spend the most time reading content.

To personalize the newsletter content experience, Alperin has found that a small amount of data goes a long way.

“I have folks where I know their name, where they live and where they are in their cancer journey,” he said. “That’s a highly powerful amount of data that’s [also] ethical.”

Knowing where someone lives is important, because location is a valuable customization tool for a cancer patient. For ovarian cancer, for instance, SurvivorNet localized the content in 21 cities so that a patient can read about providers and approaches in Phoenix or Salt Lake City.

On its site, SurvivorNet is also dipping its toe into machine-learning-driven content recommendations by suggesting articles based on which other pieces have proven most engaging to readers.

Although advertising helps fund the site, SurvivorNet was careful to set up its advertising business so that the needs of patients and its advertiser base are aligned. Alperin wants patients to be informed of all their drug options.

“I want our users to go into the doctor and say, ‘What about this?’” said Alperin, who noted that 80% of women are plopped into chemotherapy without first getting a genetic test and without knowing they could have gotten a drug upfront that targets cancer with certain genetic markers.

Pharmaceutical advertisers make up the majority of SurvivorNet’s revenue. Alperin maintains a strict separation between the businesses. SurvivorNet’s custom content journey aims to allow advertisers to reach patients at exactly the right time, such as when a newly diagnosed patient is asking a doctor about treatment options.

But its site and newsletters aren’t the only inventory options.

Just as other media companies are flocking to connected TV, SurvivorNet recently expanded into streaming with its own app, called SurvivorNet TV, which focuses on inspirational stories covering a broad range of survivors, not just cancer patients, and highlighting the caregiver experience.

Although SurvivorNet very carefully curates the information it presents to patients, which is meant to be consumed at what is often an overwhelming crossroads in their lives, Alperin rejects the notion that cancer is a defined journey that’s the same for everyone.

“Some people say, ‘Cancer is a cookbook,’ and it makes my blood boil,” he said. “The treatment choice and decision-making for your family can be dramatically better when you have the right information, and by how well you ask questions.”