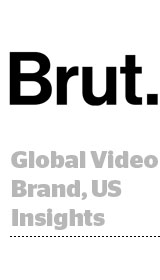 The French video publication Brut emerged with a splash three years ago, just before the French presidential campaign.

Brut produces high-quality news content with experienced journalists, but delivered casually, like friends talking to each other. In the short time since its debut, Brut said it became the third-most trusted news source in France.

But now, Brut is making its way into the much bigger and hypercompetitive US video market, armed with $40 million in new funding.

“If you want to make sure you’re creating a media brand for the next generation, you need to spark conversation,” said CEO founder Guillaume LaCroix.

The trick behind Brut’s growth is using data to make sure that its content, which was so successful with a French audience, has the same sticking power with an American one.

Brut used a social video analytics platform called Tubular Labs to understand how its content – and the content of its competitors – creates conversation with American viewers.

Upon entering the US market, Brut wanted to own topics in socially conscious areas, such as female empowerment, body positivity and sustainability and recycling. But it also wanted to find undercovered topics it could showcase.

“We measure awareness on a topic. If we think there is not enough conversation, there is an opportunity,” LaCroix said.

For example, Brut discovered that “inclusion” – a practice that ensures all types of people are accommodated – was incredibly undercovered.

So Brut worked with an advocate for inclusive design, Christina Mallon, whose arms are paralyzed due to ALS. Mallon adapts and creates products to perform daily tasks, like dressing.

Before Brut shot a video about Mallon early this year, the Tubular Labs team looked for what topics within inclusion mattered to people. Inclusive design popped up as a popular category.

“We build that video with the learning we had from Tubular to make sure she was addressing the right points of conversation,” LaCroix said – like inclusive design and inclusive fashion.

Brut used a similar tactic when it covered the Cannes Film Festival in 2019, using Tubular to unearth a new angle.

The Cannes Film Festival didn’t generate a ton of conversation on Facebook, which meant the way other news outlets typically covered the festival didn’t resonate on social media. So Brut focused on the values the actors wanted to express through their movies.

Although Brut accounted for just 5% of the content created at Cannes, its videos amassed 200 million views, or 40% of the share of voice around the festival, according to Tubular data.

“Our choice to go to Cannes through the value angle was the right one,” LaCroix said. "We wouldn’t have been able to take that angle without Tubular.”

“If you see that stories with cats perform well, and do stories about cats, you’re not going to be a media brand,” LaCroix said.

He calls Brut’s approach data-informed, not data-driven, because it uses data in context to inform the conversation it wants to create.