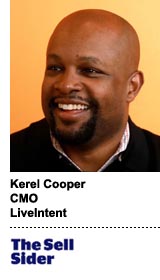 Today’s column is written by Kerel Cooper, CMO at LiveIntent.

Around 2015, publishers who put all their eggs in the basket of being promised rising engagement from videos on Facebook were caught in a precarious position when it turned out the metrics of success that Facebook touted were misleading. They learned a hard lesson: Diversify your content, but don’t hand over your best work to the walled gardens without hedging your bets.

The publishers who are thriving now are those who took that lesson to heart. They diversified their properties and their revenue without spreading themselves too thin. Here’s how they did it:

Focus on what works

Axios, like Vox and The New York Times, is a great example of a publisher who understands how to experiment and try new things while holding on to their golden goose. Their HBO show might be a flagship coup, but it evolved from that original offering of an email newsletter.

Axios eschewed focusing on strategies like social and its own website to double down on its email newsletter upon launch. Securing an email asset that renews, retains and grows in value was a smart launching point for Axios. It allowed them to responsibly pursue experimentation in other avenues. It’s the same starting point many others are finding now, including the recent journalists and industry thought leaders who have made the exodus to Substack. The securing by these publishers of a data asset whose login represents a passport for users across the internet (you need an email address to use Spotify, Roku, Amazon, Facebook, etc.) sets the authors up to be flexible in creating content for new platforms yet maintaining a way to find the same audiences across those platforms as the whim strikes. They can take their audiences with them.

Using the email address, built through the newsletter, as a through-line helped Axios. span its show across devices, channels, and platforms. It let Axios control the outreach for distribution of their video content on YouTube and the like. By simply onboarding that CRM data, Axios was able to reach their email subscribers, and people who looked like their email subscribers, in arenas where they might watch videos.

That strategy allowed Axios’ video offerings to get the momentum they needed to earn the attention of HBO. It mirrors Meredith’s own successes with People TV, which now has a syndication deal with Sony.

What you build today must springboard your future

As publishers prepare for a future where the old ways of targeting and advertising will be entirely obsolete, they must first focus on a bridge that gets them there in increments. But what will the bridge be made of?

The data the Washington Post collects lets it offer marketers unique audiences that can be reached with consistent messaging, even as the role of the third-party cookie deprecates. And the graph built from this first-party data will long outlast third-party cookies. This trove of first-party data explains why the Washington Post is such an early adopter of the Trade Desk’s Unified ID.

Of course,  smart businesses don’t put all their eggs in one basket, and following the upcoming structure of Google’s Privacy Sandbox is also important. But The Washington Post is hedging its bets by investing in other solutions that will act as a bridge before the world fully moves away from third-party cookies,  including heavy investment in contextual ad products.

Publishers like Axios and the Washington Post are giving a sneak peek of what smart publishers need to do in the future. Their alliances and ability to either work together or, at least, across the silos in their own organization, to combine their marketing and advertising data will be the key to the future successes of these enterprises.

Erik Requidan, founder and CEO at Media Tradecraft, told me that many publishers forget about the importance of early adoption. “Our industry has proven several times over that those who use early stepping stones, especially ad technologies, benefit as the market shifts,” he said. “This is a competitive advantage vs. an uncalculated risk. Coming out of 2020, publishers can actively manage the future by getting started with solutions now not later.”

There are smart ideas coming out of the space and a whole lot of invention. Events, wine clubs, clothing lines, even pet health insurance all represent smart and novel ways to create revenue and secure a publisher’s future.

However, the key is to follow a playbook like Axios and Washington Post and build in a way that secures revenue for the present period in time and allows for unimpeded growth and operation in the post-third-party cookie landscape.