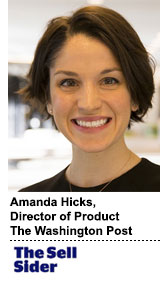 In the ever-evolving struggle to maximize traffic and ad revenue, publishers increasingly favor search traffic to bring audiences to their sites. However, publishers will soon need to balance the design and rendering of their pages necessary to boost SEO rankings against the flashy ad experiences historically demanded by many deep-pocketed advertisers.

The stakes are high: For most publishers, traffic from search is equal to or greater than traffic from all social platforms combined, comprising 23 percent of traffic to North American publishing sites in Q2 of 2020, according to Chartbeat. SEO is the lifeblood of the publishing industry, generating pageviews to support the monetization of brand advertisements, many that often come in the form of large, heavy ad formats.

In May 2021 Google is adding three key markers for user interaction to its SEO ranking as a means to improve user experience across the web. Core Web Vitals is an evolving set of three metrics that, if implemented by publishers correctly, can lead to better search ranking, higher performing ads, and, ultimately, higher ad revenue. However, publishers who ignore Web Vitals may not only see ad performance suffer, but their SEO ranking, traffic and overall advertising revenue could take a hit as well.

Core Web Vitals includes three key metrics, one of the three metrics will be the toughest issue for publishers to tackle: Cumulative Layout Shift (CLS). This metric gauges the visual stability of elements on the page and is one the biggest publisher offenders in Web Vitals measurements.

Why? CLS is negatively impacted when dynamic elements load on a page. The main dynamic offender: large ads that expand outside of an ad container, which have been historically demanded by many prominent advertisers. If you, as a reader, have ever seen article text and headlines load initially in one place only to have them shift around because an ad loads a split-second later, you’re seeing high Cumulative Layout Shift. CLS will be a daunting metric for publishers to get under control, with many publishers currently measuring CLS scores 10 to 20 times higher than Google’s passing grade.

However, publishers must improve their scores. Google is experimenting with a badge system, where if a site is slow to load because of poor Web Vitals metrics, it will receive a red progress bar as a “badge of shame” to indicate poor quality. Faster sites and those with lower CLS will have green progress bars visible to readers in the Chrome browser and load nearly instantly. A passing Web Vitals score will therefore not only favor a publisher’s  SEO ranking, but also will serve as a visual indicator of quality to readers, preventing users from exiting a particular site. I anticipate advertiser dollars shifting away from red-badged sites toward publishers with passing Web Vitals scores.

What Publishers Can Do to Fix Shifting Layouts

For CLS in particular, advertising technology and ad-serving best practices can have a big impact on whether an article passes or fails Web Vitals. A lower CLS metric will yield a higher SEO ranking and a better user experience, in turn leading to higher pageviews and thus higher advertising revenue. Additionally, several of the improvements publishers should make to improve CLS will also result in an increase in ad viewability (the frequency an ad is rendered within a user’s observable viewport), a metric critically important to advertisers due to its impact on ad engagement and ROI.

Here are three changes that publishers can make to realize big improvements in their CLS metric:

If publishers act quickly to make changes to their Core Web Vitals measurements ahead of Google’s spring rollout, they will be positioned ahead of the competition and better able to deliver both reader and advertiser value.

Having passing Web Vitals scores and an optimized reader experience means readers will not negatively associate the advertiser’s ads, often the cause for a negative CLS, with a site loading poorly. Publishers who fix jumpy layouts will be well positioned atop the search engine results list -- a place of power for both readers and advertisers.