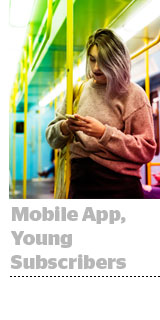 The New York Times’ mobile app, which the publisher once feared would cannibalize its desktop subscriber rate, has proven to be the watering hole where many of the Times’ young, engaged readers hang out. Readers within the app rank among the most loyal and committed, in terms of the Times’ engagement metrics.

“The mobile app is an audience-centric experience,” said Bryan Davis, senior manager of audience marketing at the Times. “It’s a slightly easier reading experience, it’s fast, and viewing and listening in the app is more intuitive. We know that all these moments are closely tied with subscription propensity.”

Readers who install an app are 60% more likely than the Times’ most active web readers to subscribe within the next 60 days.

“We want to find people that have behaviors that cross over not only to engage with the app, but install it in the first place,” Davis said. “Installation is a hurdle in the industry as a whole.”

The Times has found success with calls-to-actions that focus on installing the app instead of subscribing. Once the user installs the app, “the gateway [or paywall] is a big conversion moment for us,” Davis said.. “And the likelihood to subscribe [after the paywall] is higher than what we typically see on desktop and mobile web,”

The mobile app helped the Times connect with younger potential subscribers. Since the November election, readers 18-24 have accounted for 14% of new monthly app installs, Davis said.

The Times markets to this demographic on the platforms where they’re more comfortable, and it uses softer messaging. On Instagram, for example, it doesn’t use calls-to-actions encouraging the user to subscribe right away.

“A subscription message might not be the first thing we want to show those readers, because as a younger subscriber they have a different conversion rate,” Davis said.

When it comes to driving app installs, Facebook Messenger has been a breakout hit, recently surpassing Facebook proper as the most efficient channel to reach college students.

On Facebook Messenger, readers are 30% more likely to click through app store pages and install Times products than average.

On Snapchat, where the Times started posting content in April, the publisher is exploring ways it can incorporate app-install ads – but it hasn’t started advertising there yet.

Many of these platforms have made it easier to run app-install campaigns in recent years, but that has also increased advertising costs. The Times hasn’t seen costs spiral the way games or freemium apps have, Davis said, in part because it’s always focused on marketing to a high-quality reader.

“We are less focused on scale and more on the quality of reader that we reach,” Davis said.

Using a marketing approach focused on attracting a quality reader is showing signs of paying off in terms of lifetime value.

Readers tend to consume longer stories and read across multiple different sections more than other readers, so they value their subscriptions more. And the Times is reaching a generation of younger readers who may subscribe for years to come.

“The retention rate for annual app subscribers is the highest of any of our subscription offerings,” Davis said.