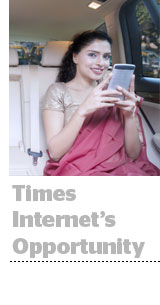 In India, the media company behind its biggest news websites – Times of India, The Economic Times and the Mumbai Mirror – also offers apps and sites where users can make restaurant reservations, study for a test, stream music, buy stocks or track cricket scores.

By building its own ad tech stack and developing mobile-heavy products that feed users’ daily habits, Times Internet is mounting a local challenge to the duopoly, which has already established a significant presence in India.

Marketers also want to advertise next to local content.

“We have 20% of all the content consumed in India,” Verma said. “We are the interest graph of India.”

The Times Internet is a subsidiary of The Trimes Group, the media conglomerate that operates the print counterparts of Times Internet’s websites. Times Internet employs 4,500 people, including 1,500 on the technical team. “We are a digital products company, not a digital media company,” Verma said.

Like other media companies, Times Internet determined that a pure ad-supported business wasn’t viable. So it built and acquired products that aren’t traditional news sites but belong within a news portfolio and become part of users’ daily habits.

Products include DineOut, India’s version of OpenTable; Gaana, a streaming music service that’s attracted 50 million people; Grade Up, which helps students study for exams; CricBuzz, a website and app that intensively follows India’s favorite sport, cricket; and MagicBricks, a Zillow competitor. The company also has coupon and rewards apps and recently launched an offshoot of The Economic Times that allows people to buy stocks.

Due to those investments, about half of Times Internet’s revenue comes from advertising, a third from its classifieds business and 15% from subscriptions and B2B payments.

“We sit in between the US and China, so we get to see where the market is going and the user experience is going,” Verma said.

China, where m-commerce reigns, serves as a particular inspiration as more Indians gain access to the internet through their phones. Of India’s population of 1.3 billion, about 400 million to 450 million consumers are online.

Even with a fraction of the population online, the Indian market has massive scale. India has more Facebook users than the US, Verma noted, but advertisers have been slow to move budgets online.

With a strong foothold into a huge market that can only get bigger, Times Internet decided to invest in building its own end-to-end ad tech stack instead of using foreign partners, a project it first started three years ago. The investment allows for a more custom, connected ad tech stack and better economics.

“If you have separate analytics, DMP, ad server and creative builders, none of those things talk to each other; there are too many discrepancies,” Verma said.

With the ad tech stack Times Internet built, the same 100 users it tracks in its ad server show up in its analytics platform and DMP – a similar value proposition Google offers US advertisers and publishers.

The Times Internet puts its DMP at the “heart” of the ad tech stack, Verma said, because of the insights it provides to grow its business and help advertisers.

“We have access to a lot of strong commercial intent data,” he said.

Data from its restaurant reservation site, for example, can help identify users who order alcohol, eat vegetarian or frequent high-end restaurants. That information can be used to help alcohol advertisers, food companies and those seeking high-income people.

With its ad tech stack, Times Internet is also capturing the long tail of the market. Its creative builder and ad optimizer helps small businesses advertise online. Since launching a year and a half ago, the business has grown 20% a month, adding up to hundreds of thousands of US dollars a month in revenue, Verma said.

That growth outpaces the already large organic surge in people in India who are starting to use the internet.

“In the next five years, another 100 million people are coming online,” Verma said. “Marketers who care about having a third option will work with Times Internet.”