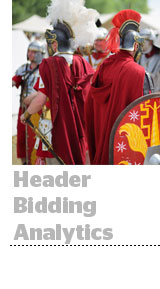 While header bidding can increase publisher CPMs and revenue, the growing complexity of the implementations makes it harder to differentiate vendor partners.

Ancient History Encyclopedia, for instance, saw CPMs rise 75% after adding header bidding a year ago. The online encyclopedia operates as a nonprofit and relies on advertising for the majority of its revenue.

At the same time, Ancient History lost track of how its 10 partners performed within its Prebid wrapper.

“Compared to the traditional waterfall, where you have a good understanding of which ad networks are showing up in what ad slot, with header bidding felt more difficult to find the right data to optimize,” said Jan van der Crabben, CEO and founder of Ancient History.

The medium-sized publisher didn’t have the resources to build out a tool internally, as many larger publishers do. So when one of its demand partners, Roxot, started sending out rudimentary analytics reports in December, van der Crabben encouraged them to build a more robust reporting platform.

The idea for Prebid analytics was born.

Roxot’s analytics tool allows publishers using the open-source Prebid wrapper, including Ancient History, to see how fast each partner is performing, and if the exchange is doing what it says it is.

When Ancient History added a new network, it saw that the supply partner didn’t add much revenue but took a lot of the publication’s impressions.

“The amount of impressions they were filling was high, but the amount they were reporting was low,” van der Crabben said. “That was something we saw only through the analytics.”

Ancient History tried to work with the partner to sort out the discrepancy, but ultimately removed it from its header bidding setup. Without that partner taking away impressions, overall revenue rose.

Ancient History again turned to Roxot’s analytics tool when it wanted to optimize the timeouts of its bidders. Too short of a timeout decreases advertising revenue. Too long of a timeout, and the user experience suffers.

By analyzing how long it took for the average partner to return a bid, Ancient History tweaked its timeout in order to find the right balance of revenue and the user experience.

It’s next looking into changing the priority of its bidders. It wants to give its top-performing partners the best chance of returning a bid in time by prioritizing them within its wrapper.

“Prebid in theory sends requests out at once, but each request is made by the browser in the order we tell them to send them,” van der Crabben said. “Particularly on mobile, those extra milliseconds make a difference in whether or not it will result in a filled impression.”

Roxot is offering the analytics tool for free to publishers, regardless of whether they are clients, to gain market awareness of its solution.

Roxot said it does not use the data it collects through the analytics tool to make its dynamic floor technology smarter, except with a publisher’s permission.

Ancient History sees this analytics tool as a game-changer for small to medium-sized publishers that can’t build one on their own.

“Before, we were just looking and how much money [a partner] said they were making for us and trusted it,” van der Crabben said. “The difference is between flying blind and not flying blind.”