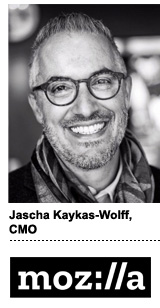 Jascha Kaykas-Wolff, CMO of Firefox parent company Mozilla, has fiery opinions about technology companies that use privacy as “nothing more than a communications ploy.”

“Most organizations aren’t taking the right steps to treat people like human beings, and that’s a big problem,” said Kaykas-Wolff, who’s been with Mozilla for more than four and a half years.

For the last couple of those, it’s been Kaykas-Wolff’s job to evangelize Mozilla’s mission, which is to develop technology that “treats people like human beings.”

Starting next week, Mozilla is planning a big marketing push to promote the existence of ETP on mobile devices.

AdExchanger caught up with Kaykas-Wolff to talk brand marketing, transparency and why he thinks top brands are on the cusp of pulling spend from behavioral advertising.

AdExchanger: What message do you want to get across with your marketing?

JASCHA KAYKAS-WOLFF: Over the last few years, we’ve been trying to identify how to help our product have more cultural relevance. We did a bunch of research trying to identify why consumers use our product, and the punchline was this: Consumers make value-driven and values-driven purchase decisions.

When all things are equal from a product utility point of view, the deciding factor is the organization’s values.

You’ve said that you believe more than half of the Fortune 100 will soon stop using behavioral advertising. What makes you think that?

One, businesses are starting to understand that they need to own their own data strategy, that it’s not something to outsource, and two, over the next few years, behavioral advertising will be shown to be one of the least effective ways to advertise. It’s a value proposition that’s on the decline already because the performance is not as good as people wanted it to be.

What is the best possible world for consumers, publishers and advertisers?

We’re seeing the model evolve now and it’s not a new model – it’s simply about reestablishing direct relationships. I say this as a consumer who also happens to be a marketer: The status quo is not okay.

What is the perfect future? To my mind, that’s when every company can describe, in colloquial language, the exchange I have with them when I use one of their products – and I get to opt in.

Crazy question, do you guys do any programmatic ad buying?

We have tried programmatic, although we don’t use it today. In the past, the first problem we had to solve in working with programmatic partners was to find a way for us not to collect customer data without consent. We also found that although a lot of the locations where we ran inventory were performant from a CPA perspective, they didn’t align with our brand.

So, we modified the way we do media planning to focus less on programmatic and buying into things like Facebook Audience Network, and more toward buying direct with publishers, like Der Spiegel in Germany and The Washington Post and The New York Times in the United States. We don’t spend on spaces where we can’t know the quality of the inventory our creative is running against.

What tactics do you use, other than direct publisher buys?

The foundation for any effective marketing is really good product marketing. We have two big buckets of tactics. First, we’re responsible for everything that happens with product engagement. If you use Firefox and you receive a notification, a push message, an email – that’s us. And then there’s what happens higher in the funnel.

How do you raise awareness with people who don’t know you yet?

We spend tens of millions of dollars on marketing, which is a drop in the bucket compared with the hundreds of millions that Google, Microsoft or Apple spends, but we get the most bang for our dollars by focusing on our brand.

We sponsor events and we host our own, like MozFest in London. We also run programs in France and Germany, for example, to position Firefox as a brand that has your back compared with technology companies that only look at people as a means to profit, and we develop content that isn’t necessarily about selling Firefox but that’s related to the issues we think are important. That sort of content actually increases purchase intent.

We have an original podcast called IRL, for example, which is in its fifth season with hundreds of thousands of listeners. But it’s not an ad for Firefox or Mozilla. It’s about helping people understand their life online and how their data is used.