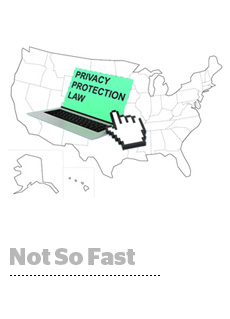 With a divided Congress, don’t expect 2019 to usher in federal privacy legislation a la GDPR… or to see a breakup of big tech.

Even if the midterms hadn’t shaken out as expected – with Republicans keeping the Senate and Democrats securing a majority in the House – the chance for congressional action on either front, particularly before 2020, would still have been pretty low.

“If you need the social media platforms to win the election, why would you restrict its use in any way?” said Forrester principal analyst Renee Murphy. “Even the Democrats don’t talk about a GDPR-like solution, because they are supported by Silicon Valley.”

Politicians spent more than $350 million in the US on Facebook ads alone since May.

There will, however, be more grandstanding, so clear your calendar. Democratic House Representatives will presumably use their subpoena power to bring reps from Facebook, Cambridge Analytica, et al., in for more testimony, and to trigger new investigations into Russian hacking, cybersecurity and the like. If the House does manage to pull a federal privacy draft together, it’ll likely die in the Senate.

But Sheila Colclasure, LiveRamp’s global chief data ethics officer and head of public policy, is optimistic about some movement this year, not that it won’t be extremely difficult.

She sees interest from both parties in some form of federal privacy legislation, but “tackling the complexity of developing practical standards that protect people while enabling the beneficial use of data and getting collaboration across the aisle is the challenge.”

In the meantime, as Democrats gain more governor seats, states will keep rolling out their own privacy rules inspired by California’s Consumer Protection Act (CCPA), which takes effect in 2020.

“I am watching the governors races,” Murphy said. “That is where privacy laws can be impacted.”

The ad industry is watching closely, too.

The Association of National Advertisers is teaming up with the business community to push for broader federal legislation “as a response to the challenges that GDPR and CCPA present to the marketing community,” said Dan Jaffe, the ANA’s group executive VP for government relations.

But it’s unclear what effect that will have in the foreseeable future.

“In a divided Congress, people are going to be looking for areas where there might be some potential consensus, and privacy will be a difficult area,” Jaffe said. “Unless you can come up with some national rules, there won’t be the consensus from the business community that you need.”

But there might be just enough general accord to squeak through something a little less difficult to agree on, like the Honest Ads Act, a proposed bipartisan legislation pushing for more transparent online ad disclosures akin to what’s required for TV and other traditional media.

There will likely be more rhetoric than action in terms of antitrust proceedings against the large tech platforms, despite the Trump administration’s interest in looking at Amazon, Facebook and Google for violations.

“Political theater … is what we do in this country when it comes to antitrust action against the data platforms – there will be no breaking up these companies,” Murphy said.

Never say never, however, said Forrester principal analyst Fatemeh Khatibloo. The US might just take a page out of Europe’s playbook. At Web Summit in Portugal on Wednesday, the EU’s antitrust chief Margrethe Vestager observed that the US has a “renewed, deeper interest and curiosity as to what we are doing in Europe.”

And don’t count out the moves being made right now by the Federal Trade Commission (FTC), either. The FTC is populated with an entirely new slate of commissioners, several of who come from an antitrust background, and is in the process of hosting a series of hearings that could fundamentally reshape its enforcement agenda next year.

“The FTC is very concerned about antitrust issues and how privacy overlap,” Jaffe said. “The FTC Chairman [Joe Simons] has spoken on this topic: If you’re not careful how you handle privacy issues, that may affect the ability for marketplace entry and competition.”

But whether any of this will lead to new cases against mergers or even a move to break up the big guys is a question for the bookies right now.

“We will have to see,” Jaffe said. “In fact, I think that should be the headline of any story about any of this: ‘We’re just going to have to wait and see.’”