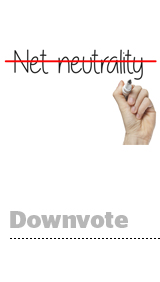 Net neutrality is not long for this world.

The proposed rule, part of the FCC’s effort at “restoring internet freedom,” will be subject to a 90-day public comment period before (most likely) being passed.

The debate got heated.

“Today’s notice should more appropriately be known as the ‘Destruction of Internet Freedom Notice of Proposed Rulemaking,’” said Democratic FCC Commissioner Mignon Clyburn, who “vociferously” (her word) dissented on the vote. “If ratified, this will deeply damage the Federal Trade Commission’s ability to be a champion of consumers and competition in the 21st century.”

A quick rewind of the clock: Title II gave the FCC its authority over internet service providers in 2015. Reversing the framework sets the stage for returning to the “light-touch regulation” Ajit Pai has been gunning for since before he was elevated to the chairman’s job in January.

In Pai’s view, the FCC’s actions under the previous administration, led by his former boss, Democrat Tom Wheeler, were an overstep of the commission’s legal authority.

As a byproduct of the reclassification, which the FCC used as the foundation of its now-defunct broadband privacy rules, the FCC was stripped of its power to regulate online privacy practices.

Now that he’s in the top seat, Pai is systematically putting his plan into place to hand authority over online privacy protection back to the FTC.

Thursday’s vote is another concrete step toward removing what he called the “bureaucratic straitjacket known as Title II.”

Pai, who has a soft spot for colorful language, is making good on promises he made after the election. In December, he told a conservative think tank that it’s time for the FCC “to fire up the weed-whacker” and get rid of the “regulatory underbrush.”

On Thursday, he called net neutrality a “proverbial sledgehammer wielded against a flea – but there was no flea.”

From an advertising perspective, if net neutrality goes the way of the dodo, telcos, which control the pipes through which content and ads are delivered, would in theory be able to create fast and slow lanes to manipulate the speed of delivery.

“We should not let broadband providers define the rules of engagement,” Clyburn said.

But Pai, a former Verizon lawyer, parried, noting a lack of evidence that the broadband industry’s power to prioritize the delivery of certain types of content over others will be used for ill. One of Pai’s first orders of business when he took office was to drop the previous commission’s investigation into zero-rating plans, which would allow carriers to provide services that don’t count against a user’s data plan, such as streaming movies or music.

The public now has three months to submit comments on the proposed rule to kill Title II. More than 1 million comments have already poured in on the rule’s first draft, which was posted to the FCC’s website in late April.

But before net neutrality is officially tossed onto the dust heap of history with the reclassification of broadband as an information service rather than as a utility, net neutrality supporters will undoubtedly file a lawsuit to challenge the move, which Pai will have to defend in federal court.