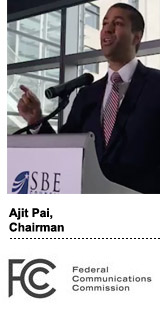 On Wednesday, Federal Communications Commission Chairman Pai laid out his plan for dismantling net neutrality regulations with a proposal to reverse Title II.

Title II is the regulatory framework the previous FCC, led by former Chairman and Democrat Tom Wheeler, used to reclassify broadband providers as common carriers and therefore give it authority over ISPs.

The commission will vote on the rule at its next meeting on May 18. If adopted, the rule will go out for a public comment period before being passed.

If net neutrality hits the cutting room floor, as seems quite likely, telcos – which control the pipes – will have more control over content and how it’s delivered. In theory, an ISP would be able to manipulate ad delivery speeds and possibly accelerate the delivery of its own content over that of competitors.

Pai decried the notion that there’s any evidence of broadband providers having ever created fast and slow lanes for internet traffic, calling any claims to the contrary as "hysterical prophecies of doom."

He’s been a vocal foe of Title II since the party-line vote that brought it into play for ISPs in 2015.

At the time, he expressed hope that he’d be able to look back on the vote “as an aberration, a temporary deviation from the bipartisan path that had served us so well.”

With the proposed rule on deck, the FCC takes “a significant step toward making that prediction a reality,” Pai said Wednesday in Washington, DC, at an event hosted by conservative think tank FreedomWorks and the Small Business & Entrepreneurship Council.

“Later this year, I am confident that we will finish the job,” Pai declared. “Make no mistake about it: This is a fight that we intend to wage and it is a fight we are going to win.”

The proposal contains three main elements: to classify broadband providers as information services companies; to eliminate the general internet conduct standard, which gives the FCC broad control over how ISPs conduct business; and to get rid of what’s known as the bright line rules.

The bright line rules were a key component of the FCC’s 2015 Open Internet order, which prohibited broadband providers from blocking access to content, throttling internet traffic and engaging in the paid prioritization of certain internet traffic.

This isn’t Pai’s first assault on the regulations developed by his predecessor.

One of the first things Pai did when he took the reins as FCC chief in January was to close what he called “a wide-ranging investigation” of free-data programs, which allow wireless companies to offer the ability to stream music, video and other such content free from the restraints of data limits.

These offers are “very popular among consumers, particularly lower-income Americans,” Pai said. “But no – the prior FCC had met the enemy, and it was consumers getting something for free from their wireless providers.”

If Pai is successful on May 18, the road is paved for “light-touch regulation,” Pai said. It will also set the stage to return authority over online privacy to the Federal Trade Commission. When ISPs were reclassified as common carriers, the FTC was stripped of its power to regulate their privacy practices. Repealing Title II will restore the FTC’s authority as a cop on the online privacy beat.

President Trump already repealed the FCC’s ISP privacy regulations in early April, before they went into effect. The rules, passed under Wheeler, would have required broadband providers to obtain explicit consent before using subscriber data for targeted advertising, including geolocation information, app usage and web browsing.

Pai is determined to make sure net neutrality faces the same fate. But net neutrality advocates, such as Sen. Al Franken (D-Minn.), won’t go down without a fight.

.@FCC @AjitPaiFCC Let me be very clear: getting rid of #NetNeutrality would destroy the internet as we know it. I plan to fight @FCC @AjitPaiFCC's proposal.