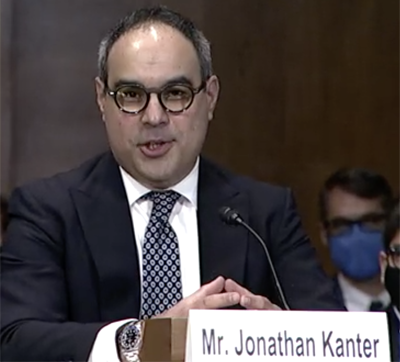 If there’s one thing lawmakers from both sides of the aisle seem able to agree on, it’s the need to rein in Big Tech.

Bipartisan support for taking Big Tech down a peg was evident during Jonathan Kanter’s nomination hearing before the Senate Judiciary Committee on Wednesday.

(The same bipartisan vibe was also on display the day before when Facebook whistleblower Frances Haugen testified before congress about Facebook’s penchant for putting “profits before people.”)

Kanter, a longtime critic of the large tech platforms – and Google in particular – is President Joe Biden’s pick to lead the antitrust division of the Department of Justice, which filed an antitrust lawsuit against Google in October of last year focused on its alleged dominance of the search market.

But although the overall tone at Kanter’s nomination hearing was cordial and supportive, Republican senators did press him on past remarks disparaging the consumer welfare standard.

Feeling out the consumer welfare standard

The consumer welfare standard has become one of the key concepts underpinning antitrust enforcement. In a nutshell, the standard is used to determine whether business practices harm consumers based on whether they cause prices to rise or fall in the long term.

Because the standard focuses on a strict definition of economic welfare and largely ignores the negative effect that anticompetitive practices can have on innovation, labor, suppliers, political discourse, quality and social well-being, the progressive argument is that it’s not fit for purpose in the digital economy.

Google and Facebook, for instance, provide the majority of their services for free, which means any harm they cause isn’t to do with pricing. In digital markets, free or nearly free products are supported by other parts of the business.

Aka the “Senator, we run ads” business model espoused by Mark Zuckerberg before Congress in 2018.

The lines are beginning to blur between data protection, privacy regulation and antitrust enforcement, largely because of questions about the efficacy of the consumer welfare standard as a touchstone for evaluating anticompetitive conduct.

This dynamic has caused a bit of friction between Republicans and Democrats.

Many Democrats advocate updating US antitrust laws to take tech platforms with free services into account, while conservatives have long supported the consumer welfare standard because it’s relatively simple to apply and precludes antitrust enforcement based on difficult-to-measure intangibles.

Well, is it fair?

The closest Kanter came to a grilling during his nomination hearing was in an exchange with Sen. Mike Lee (R-UT), when Kanter was asked whether the problem with the consumer welfare standard isn’t the standard itself but rather how it’s been used, which is by judges to “entertain speculative economic analysis.”

Kanter agreed and reiterated his view that the focus in antitrust enforcement should always be on preserving competition and any individual decision needs to be evaluated on a case-by-case basis.

But what will that mean in the tech space?

Kanter had this to say in response to Sen. Marsha Blackburn (R-TN), who prodded him on how the consumer welfare standard might be applied to technology platforms.

Antitrust laws “have to address market realities and market realities have shifted in dramatic ways” over just the last 20 to 30 years, Kanter said. This, in turn, has changed the types of harms that can be inflicted on society as a result of the concentrations of power.

“Those harms can embody privacy, can involve the marketplace of ideas, the distribution of information and political discourse,” Kanter said. “To be effective, the antitrust laws, in my view, should be enforced in a manner that adapts to those market realities.”